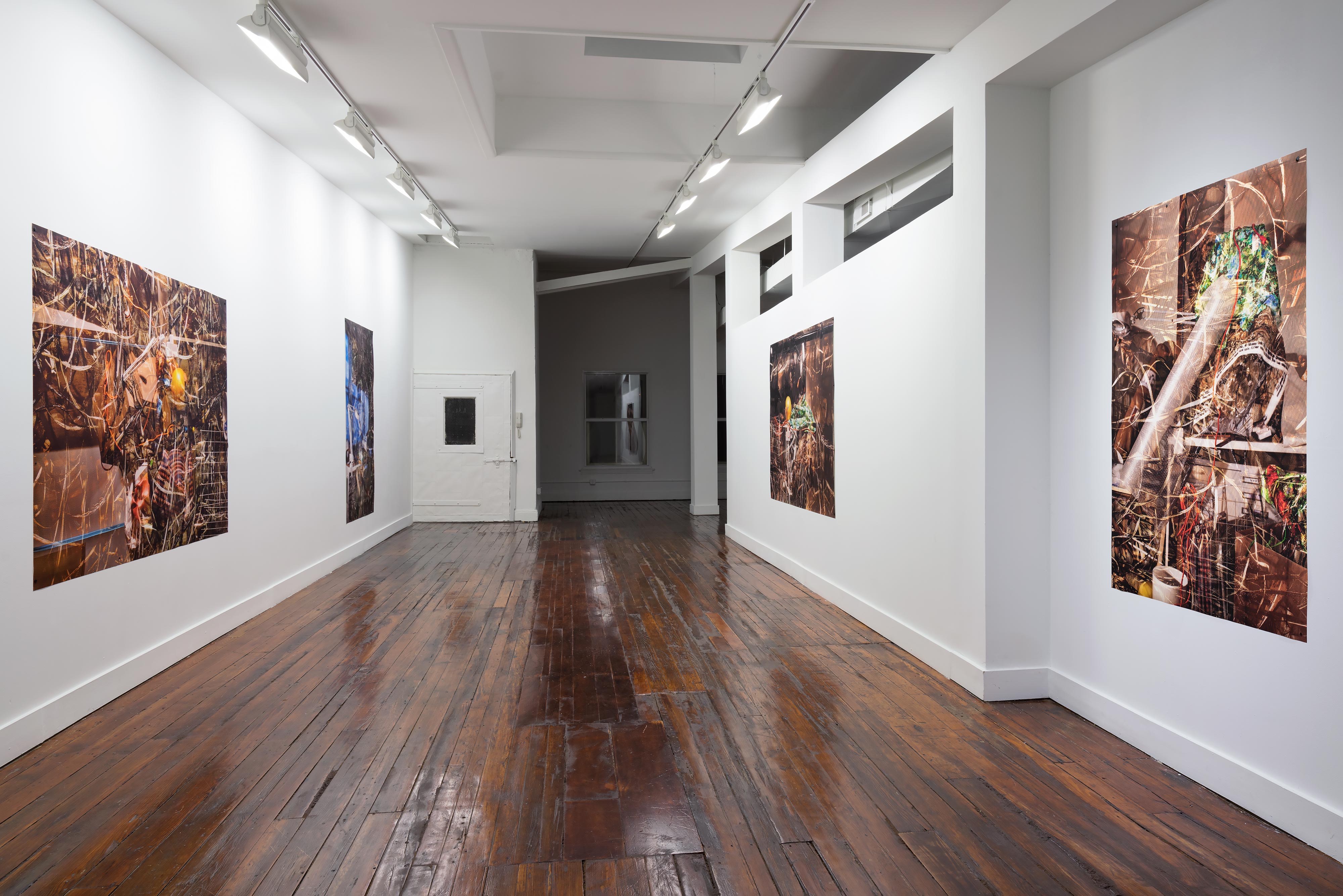 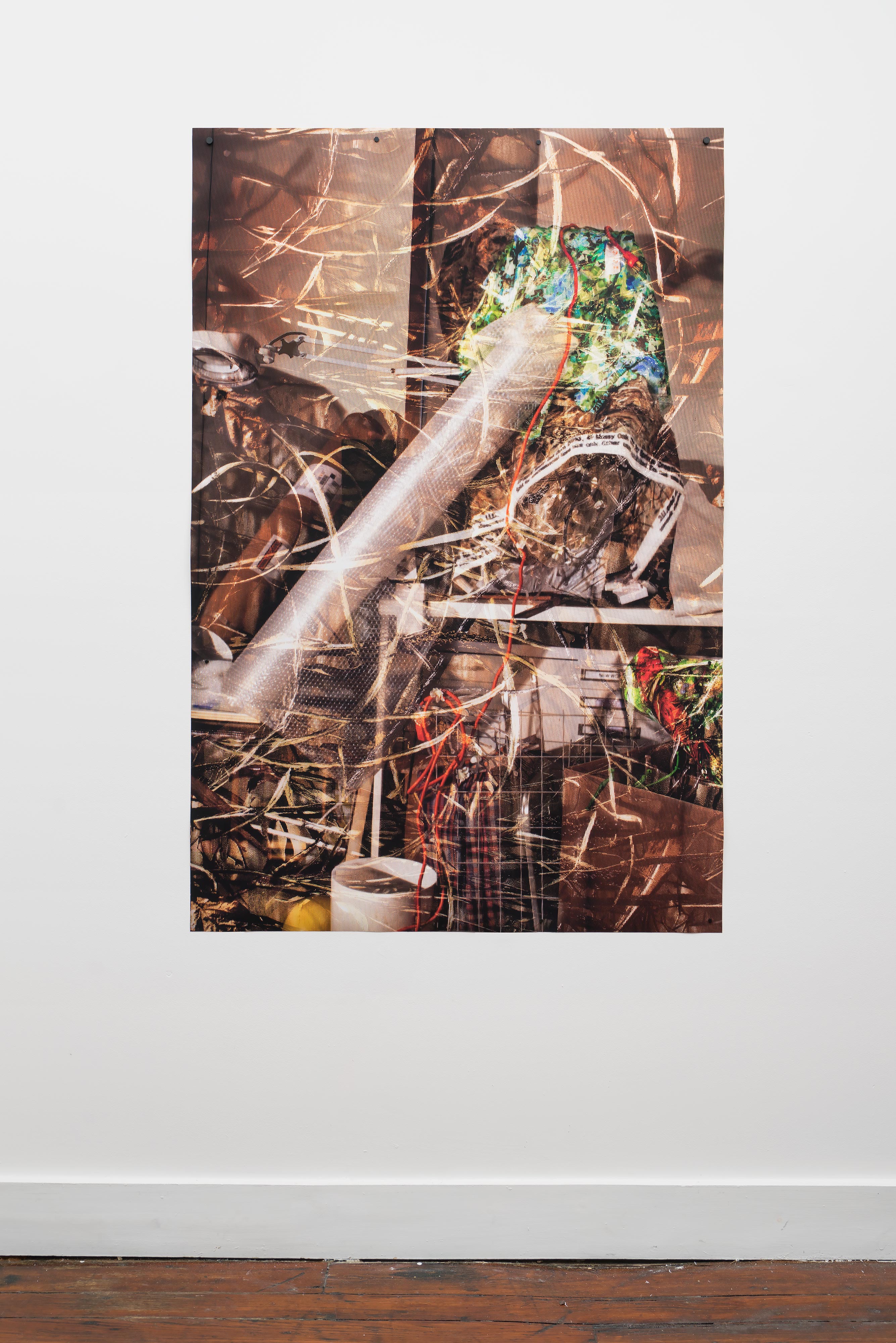 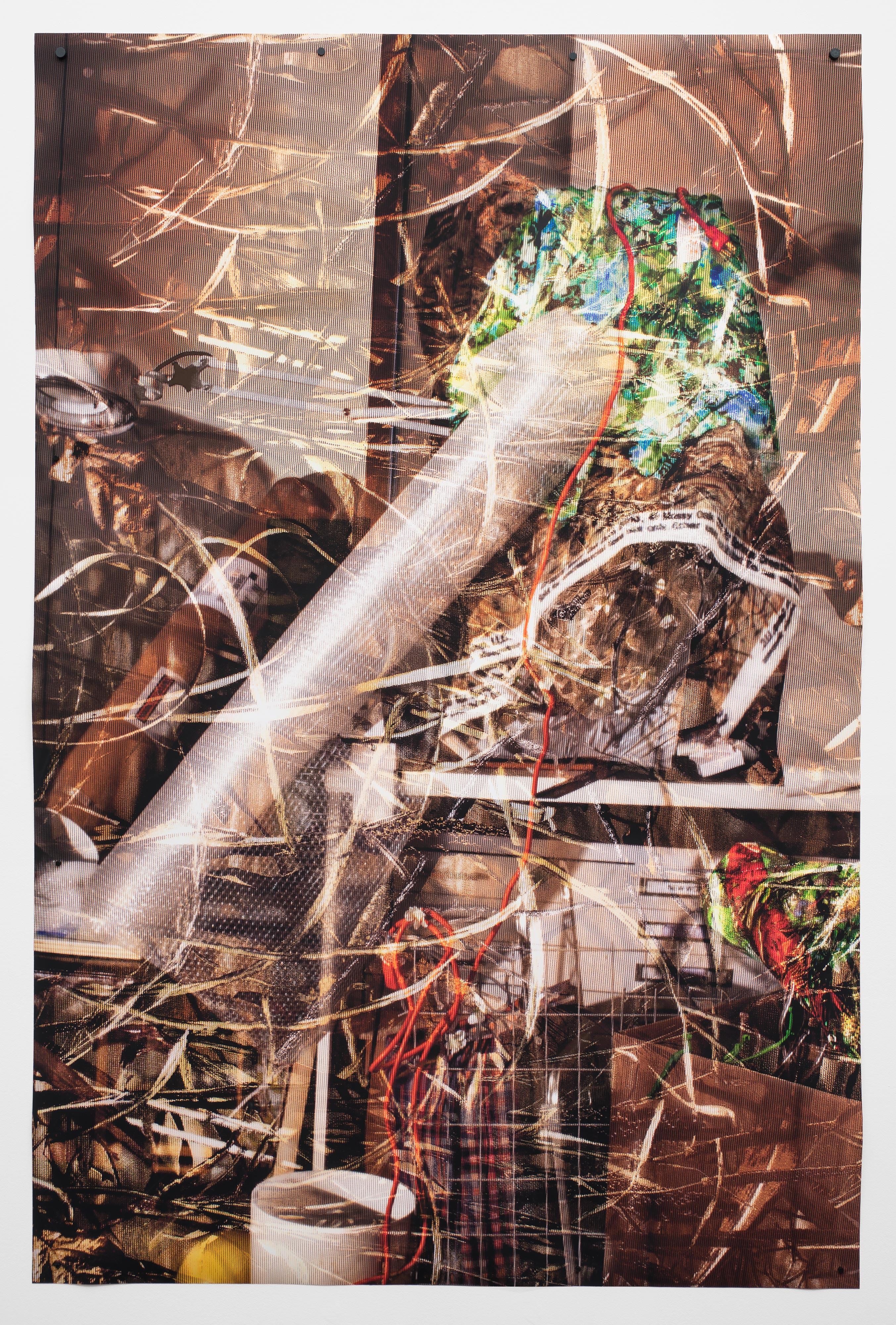 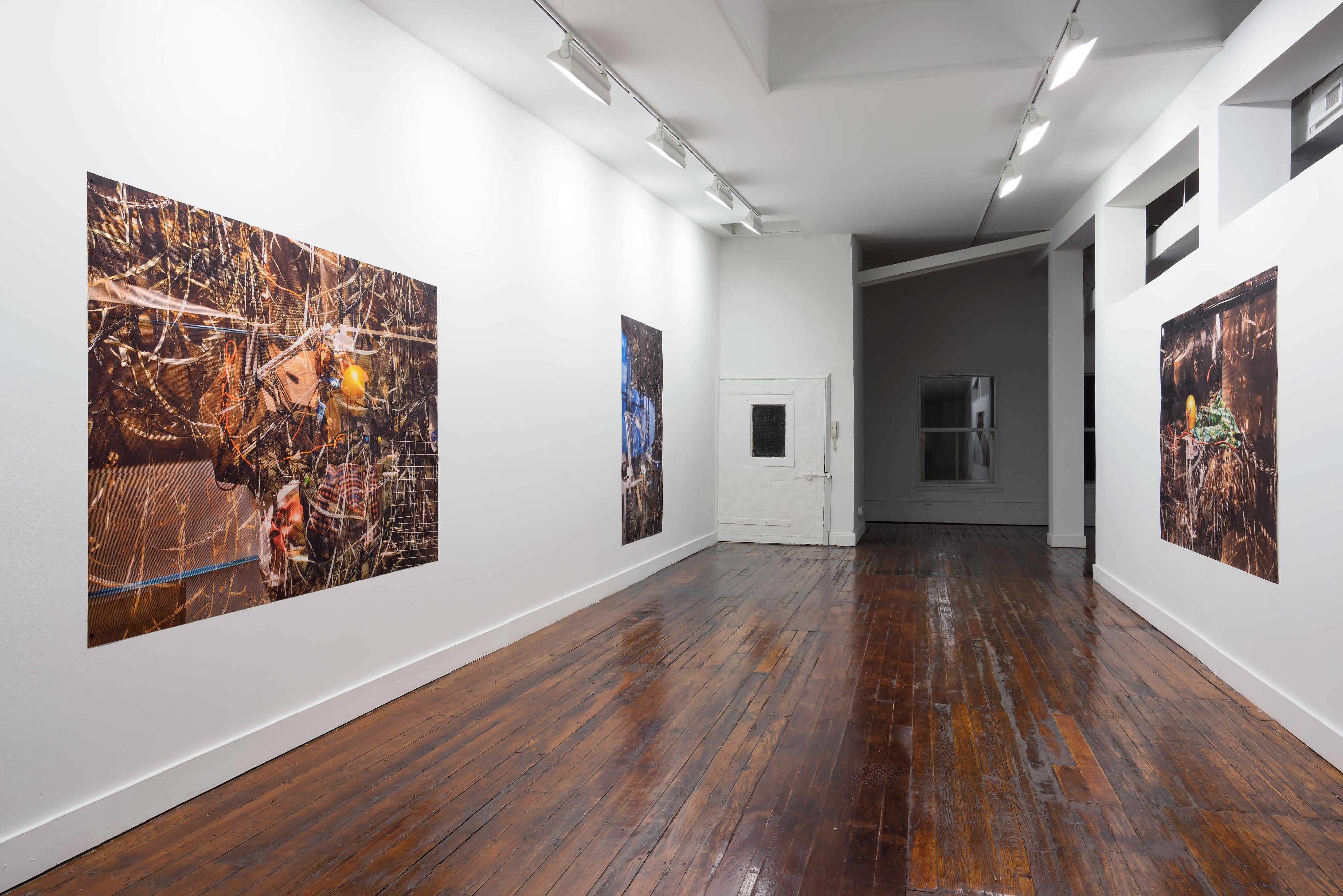 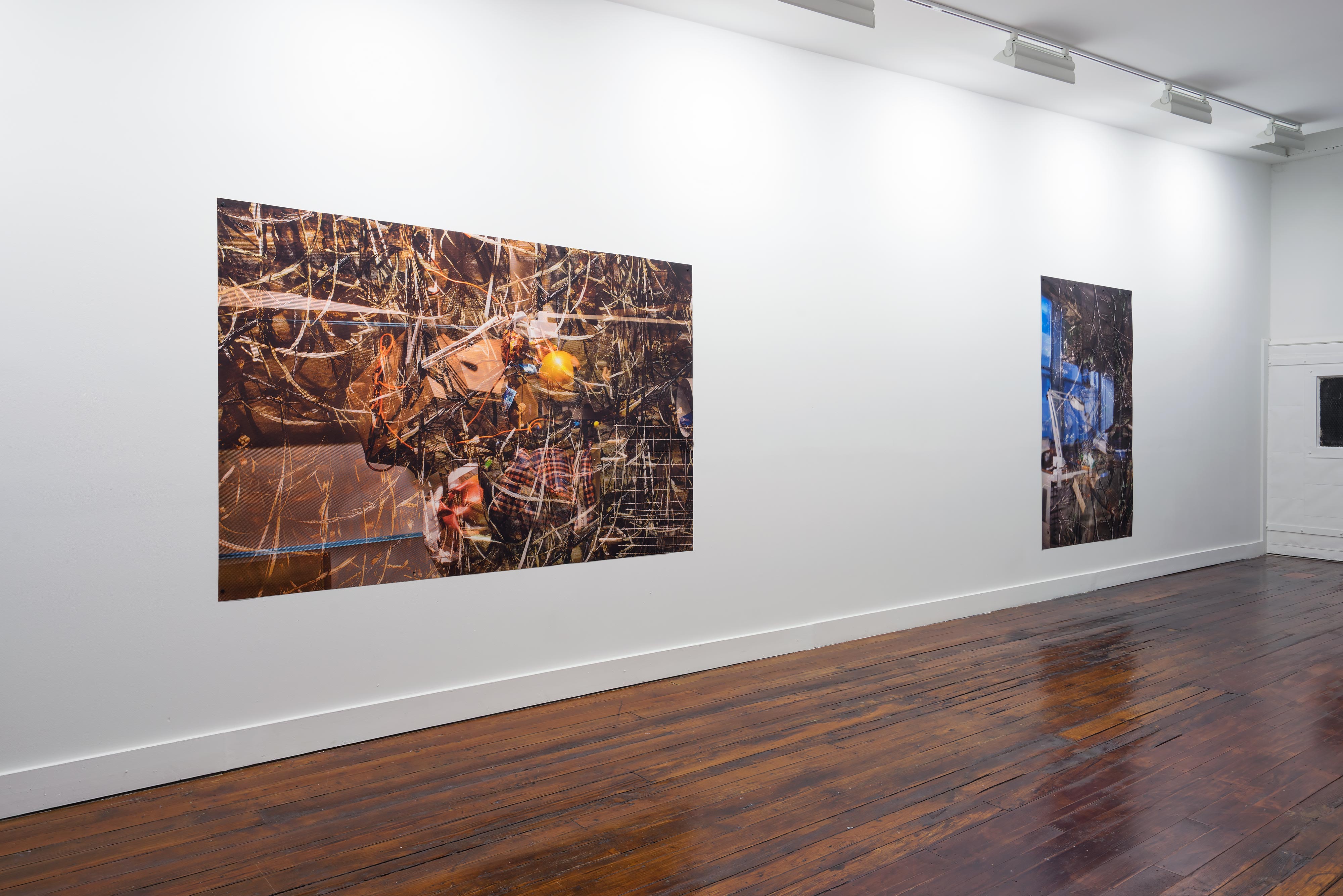 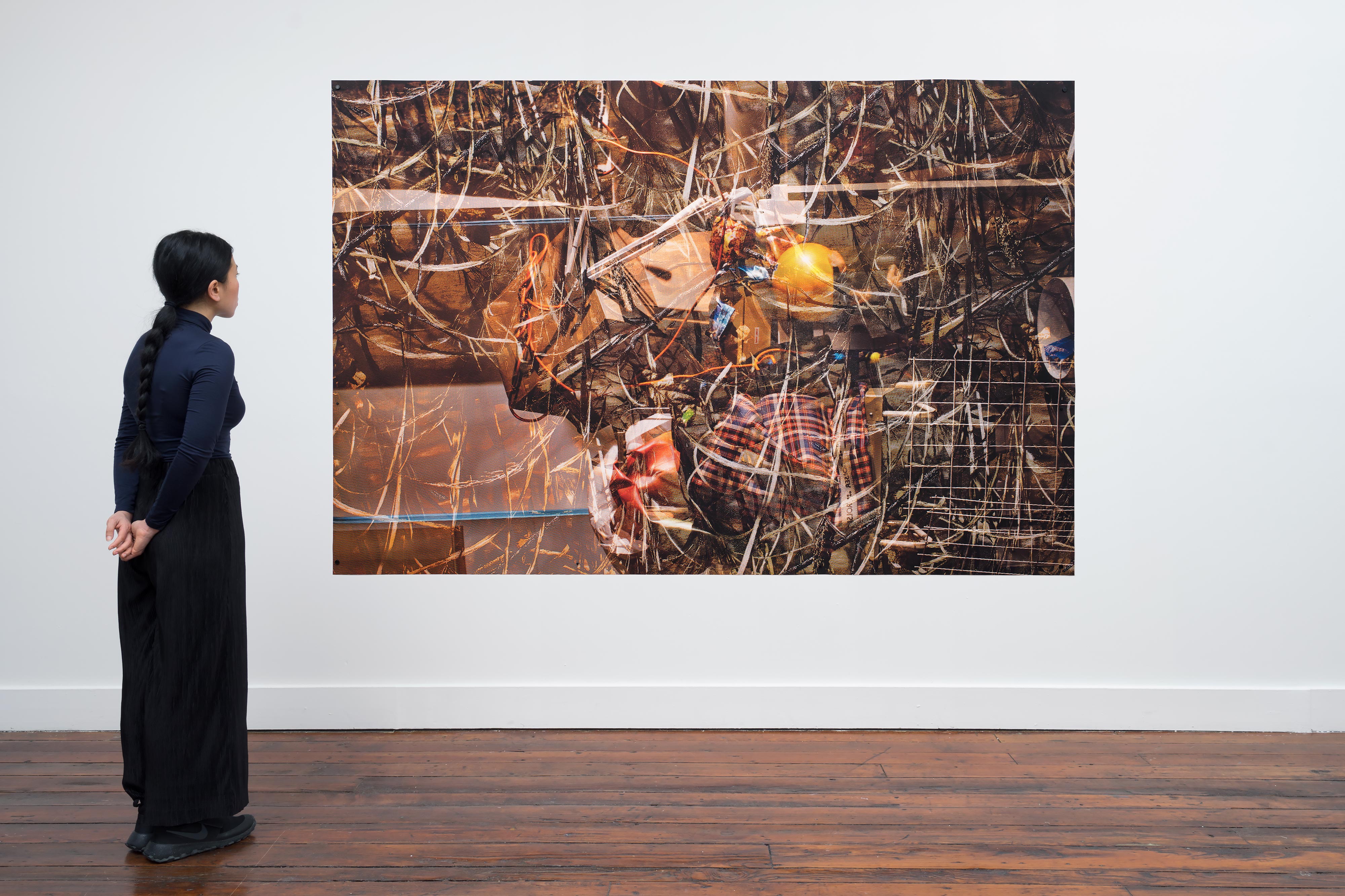 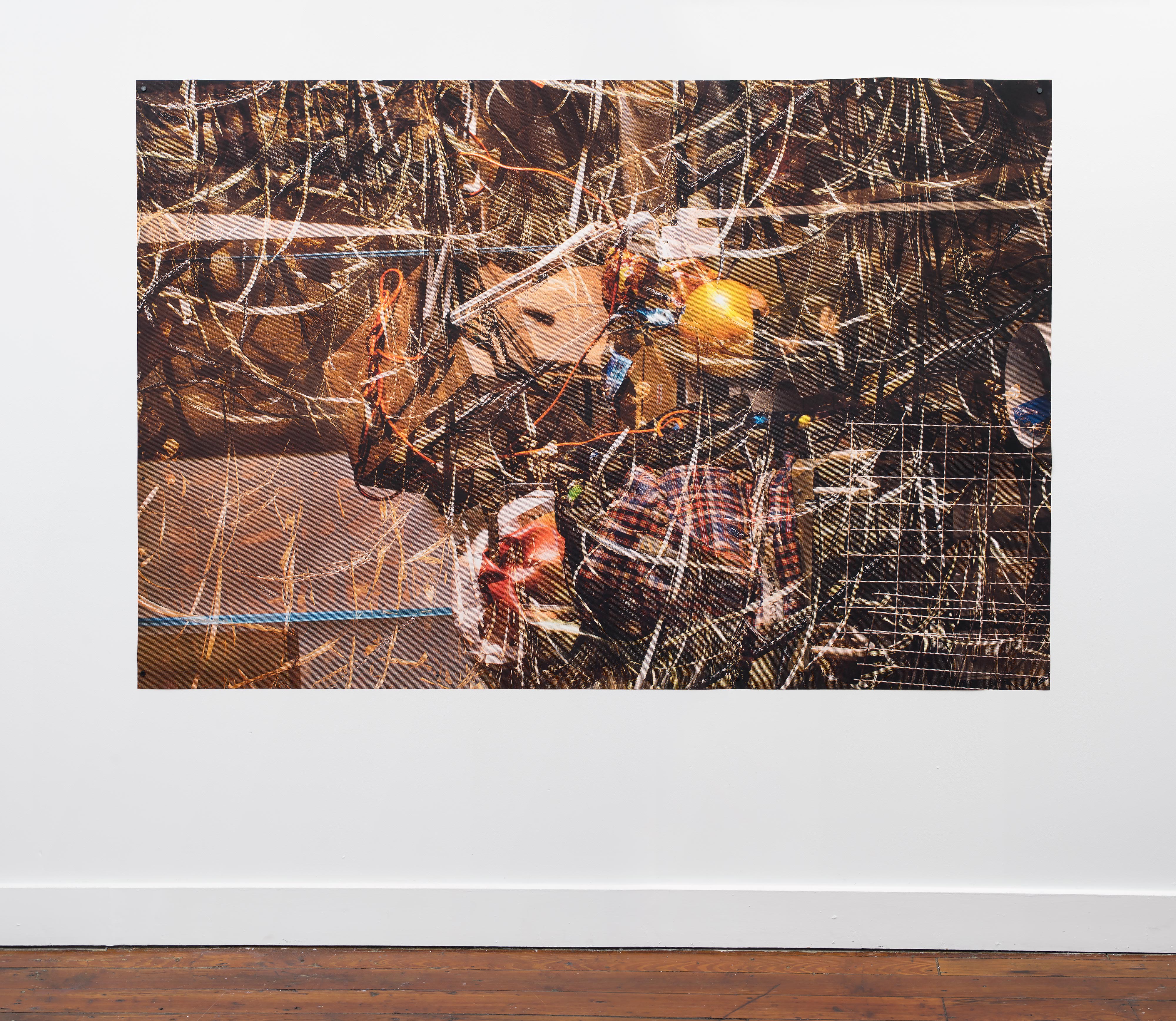 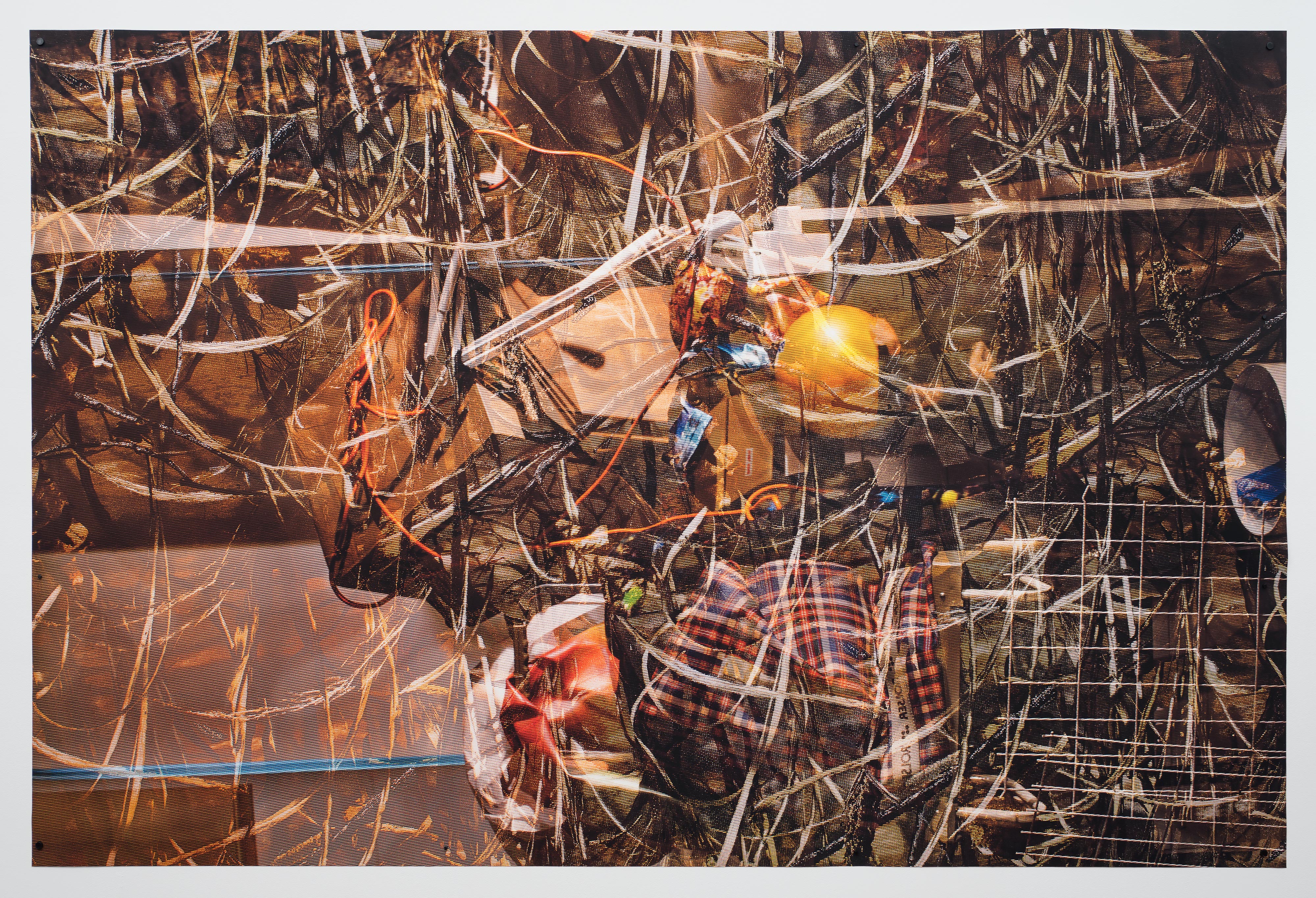 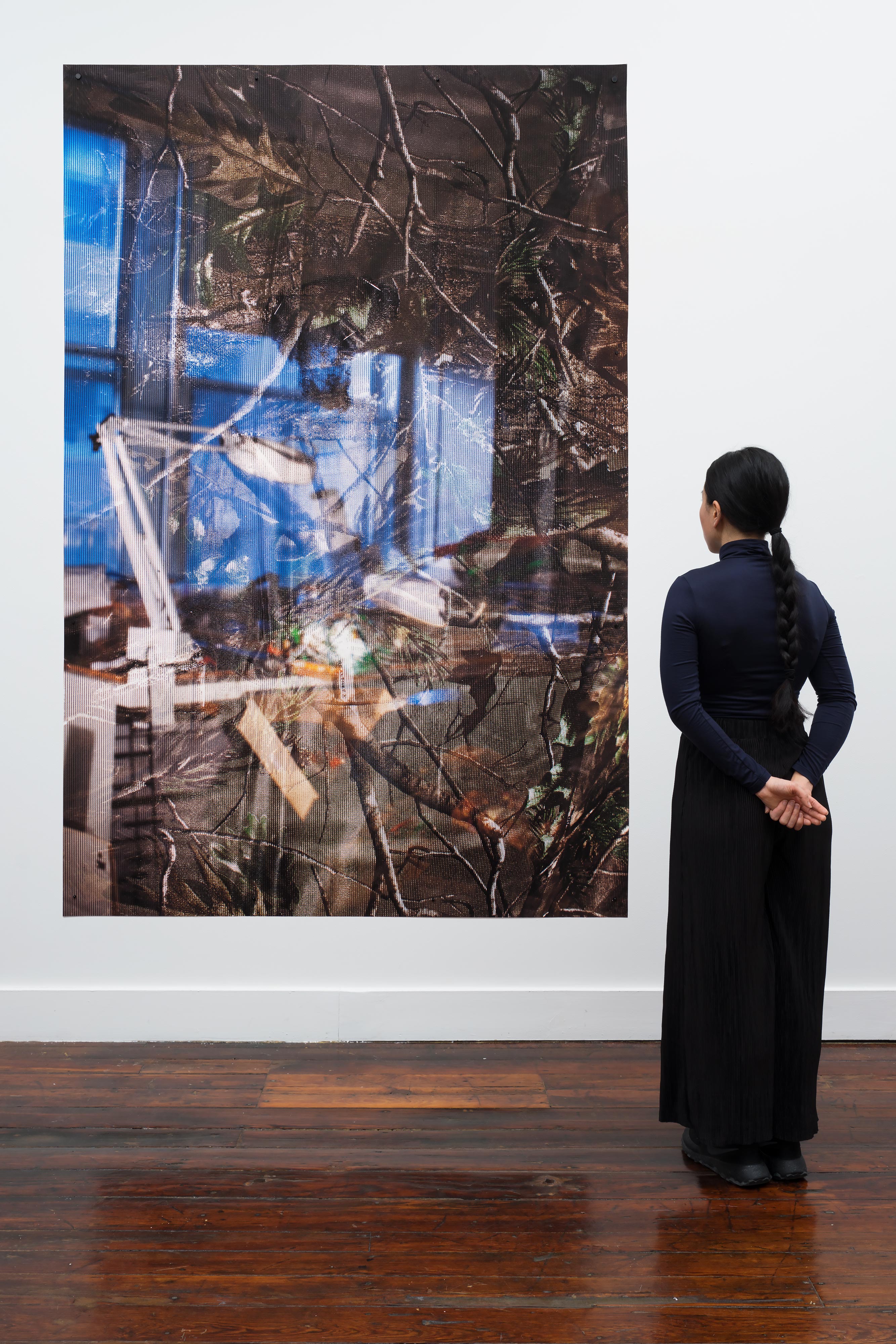 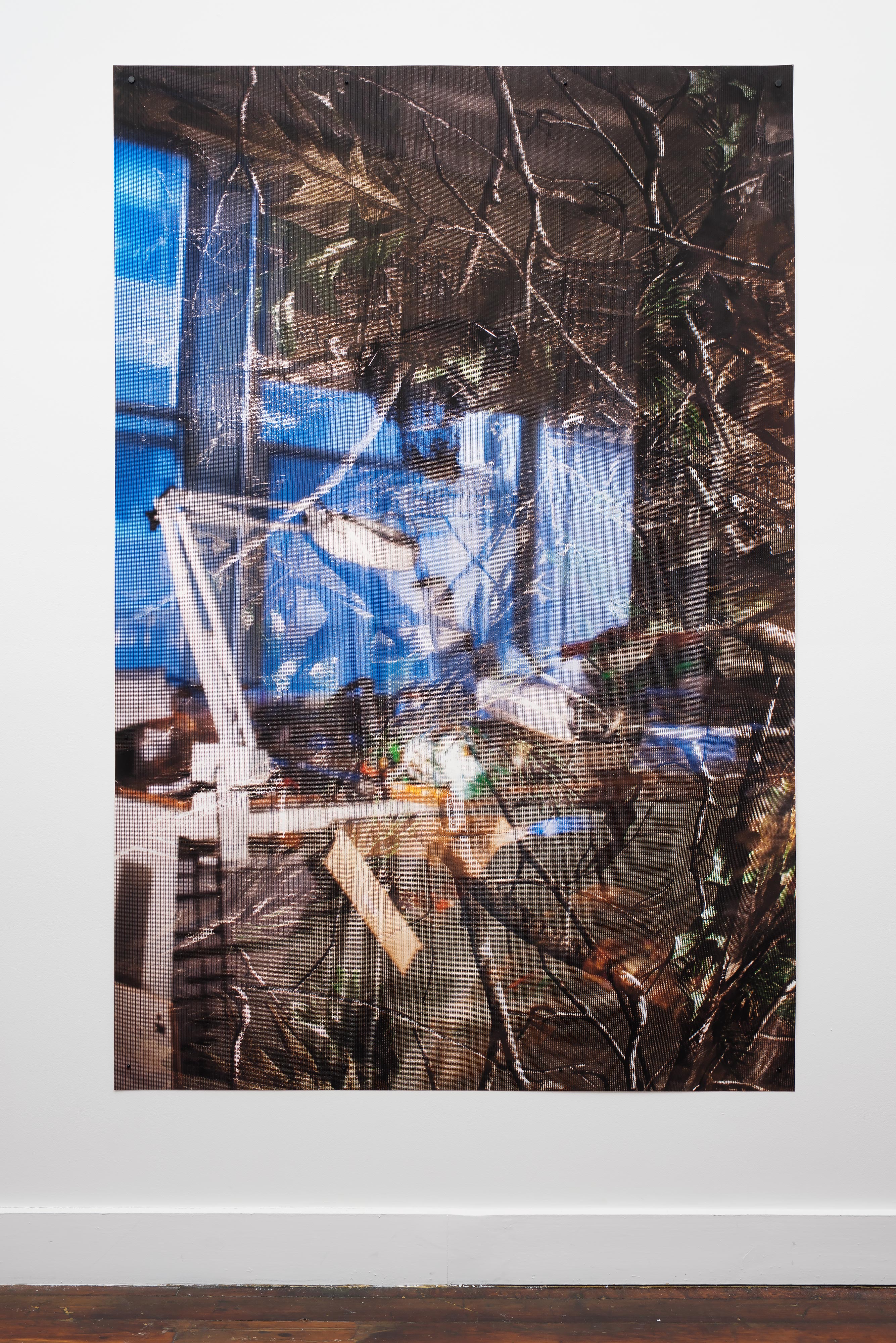 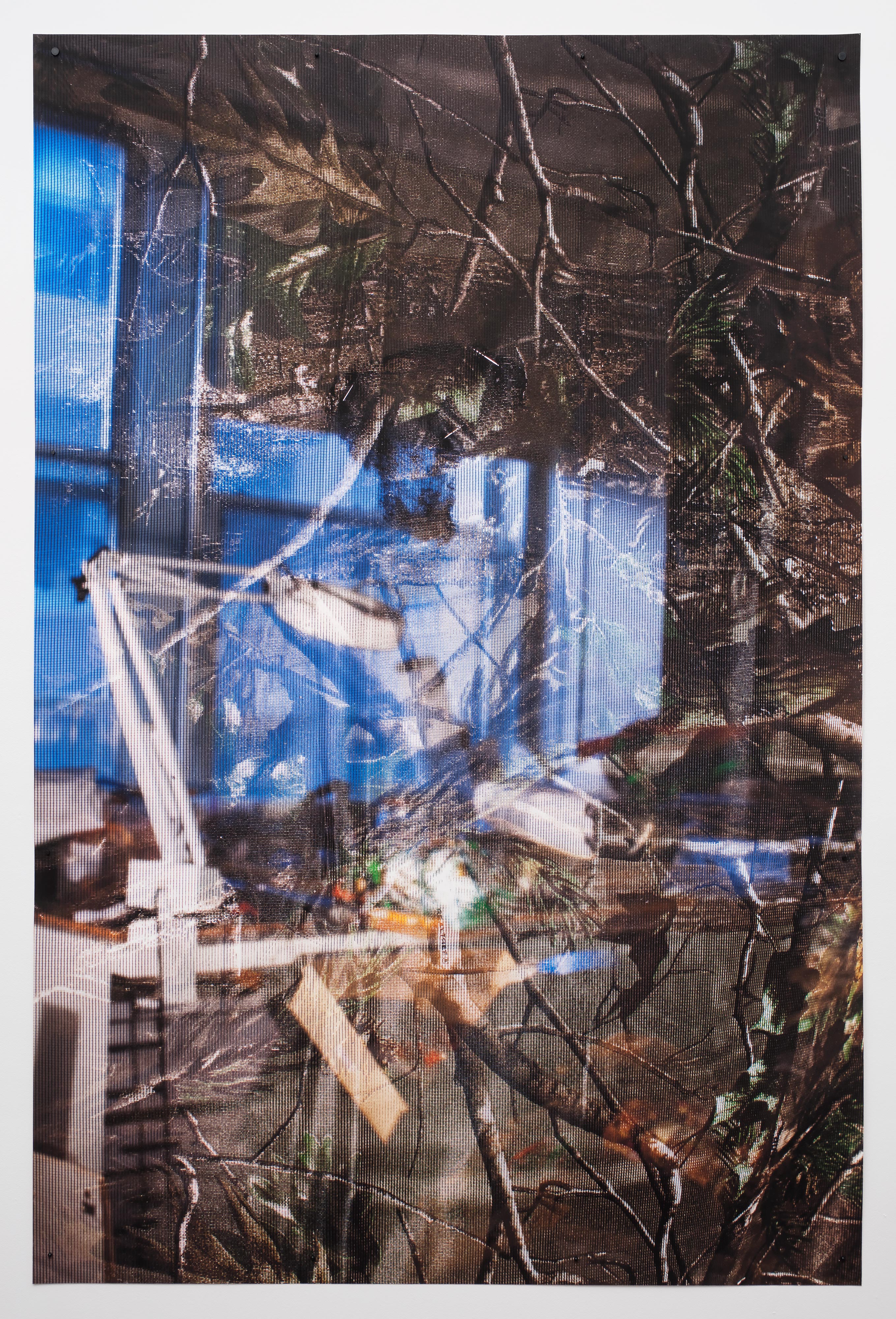 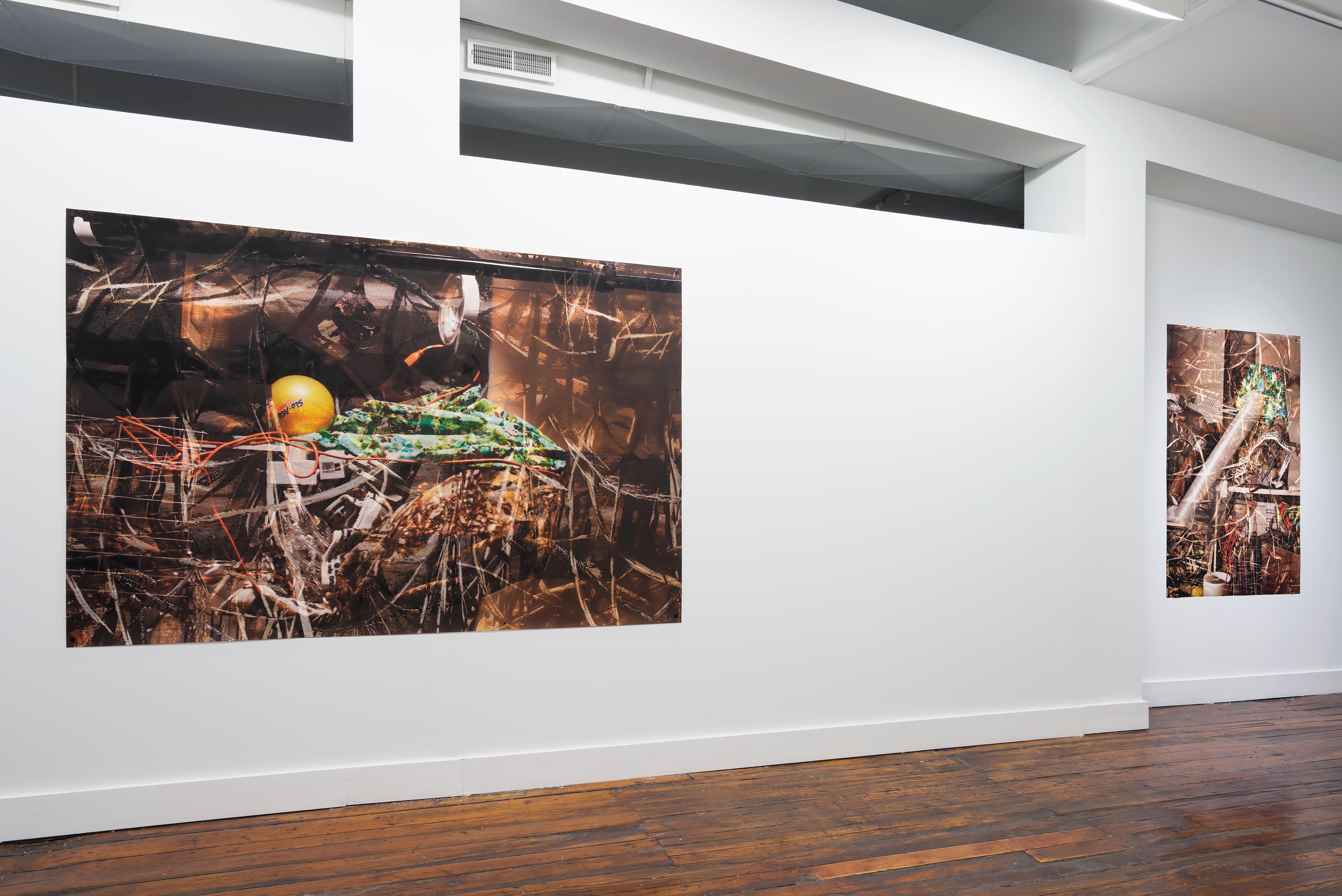 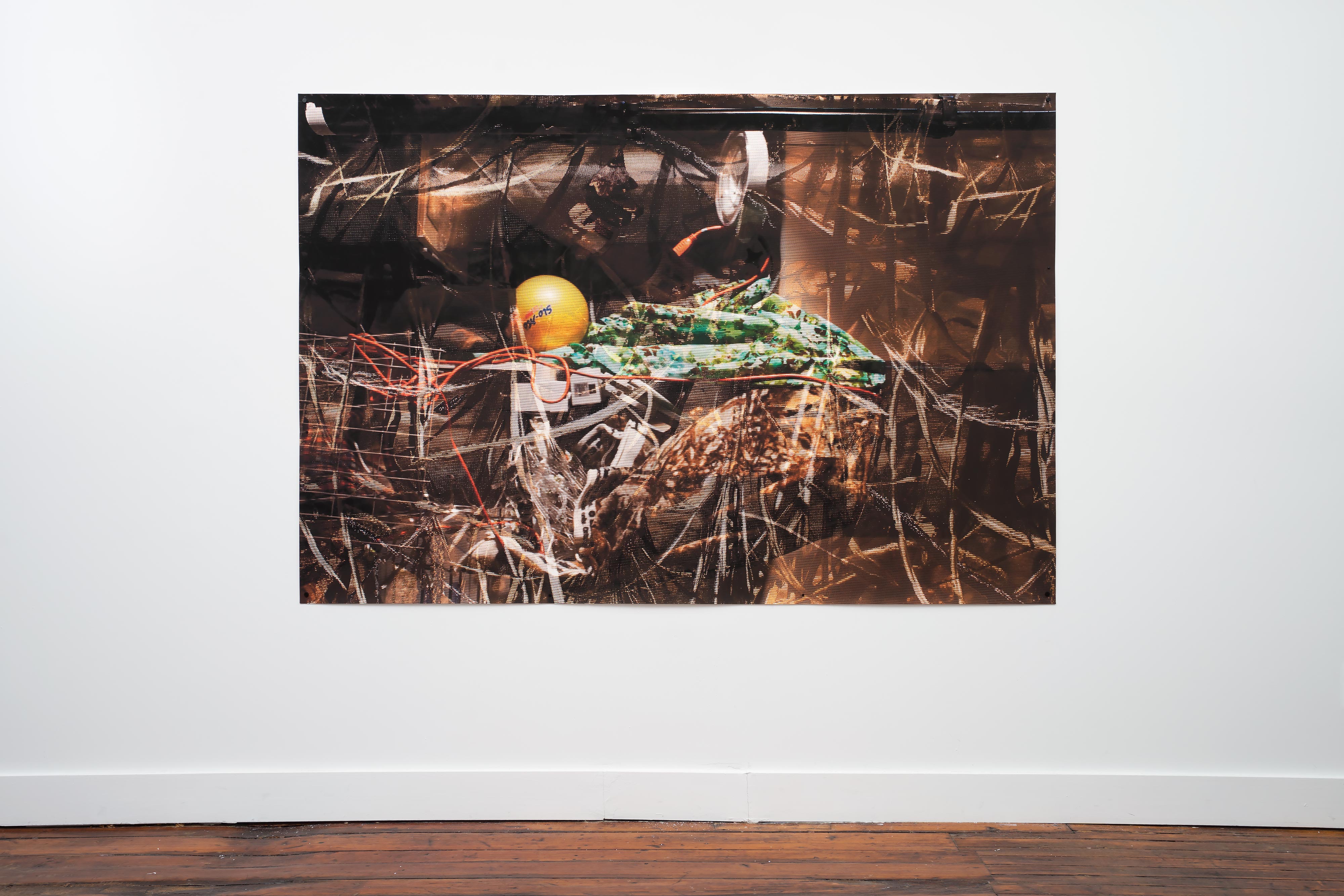 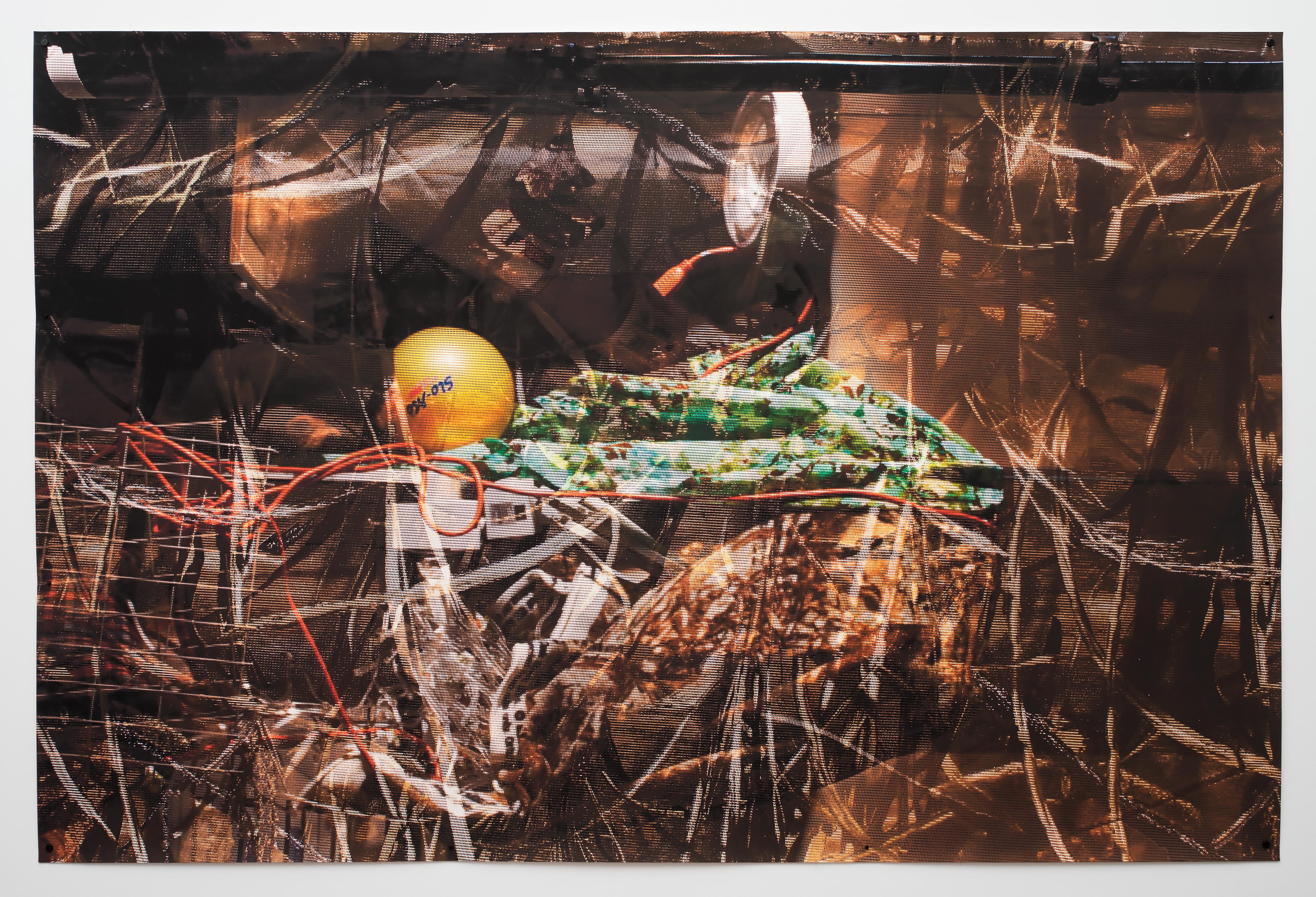 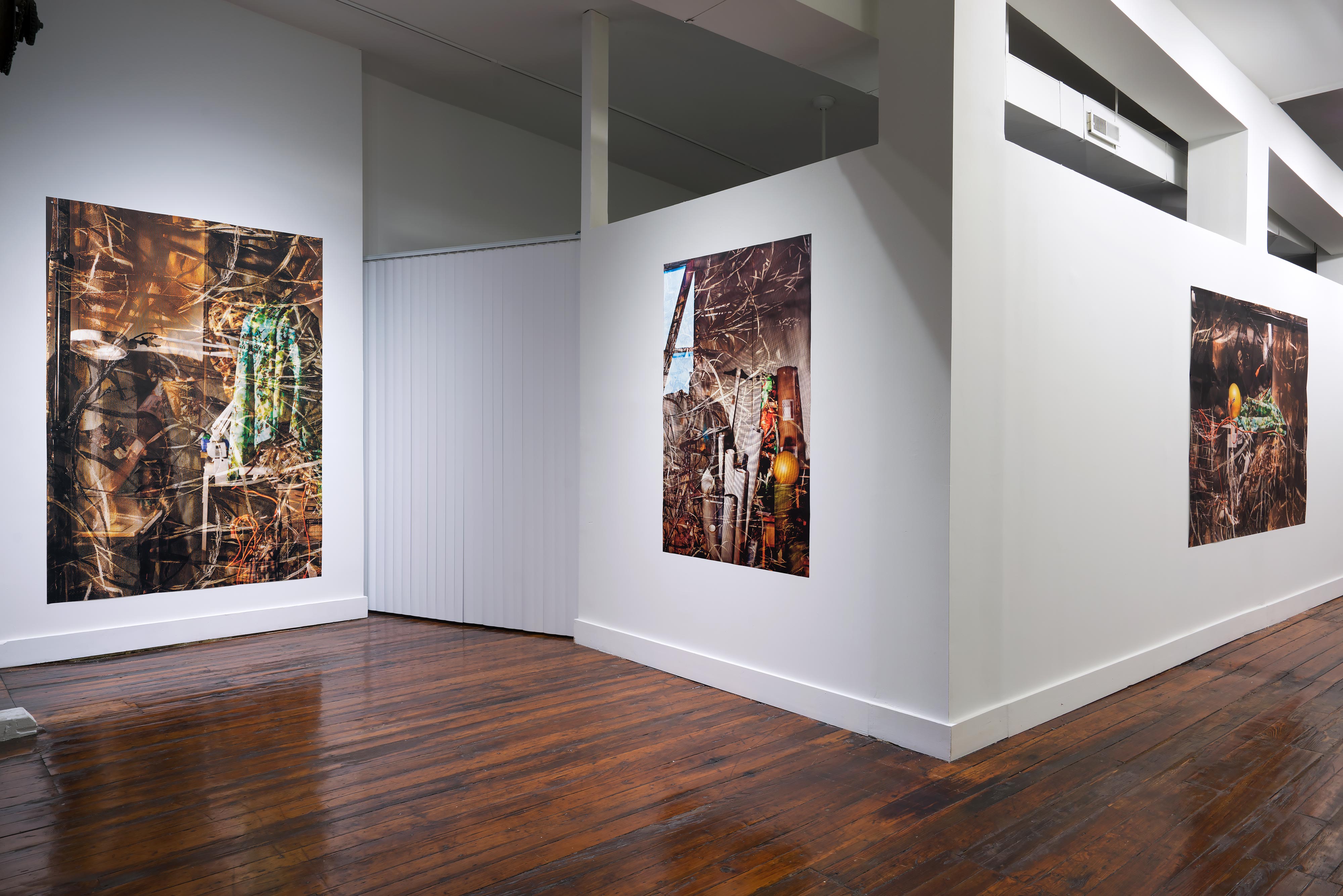 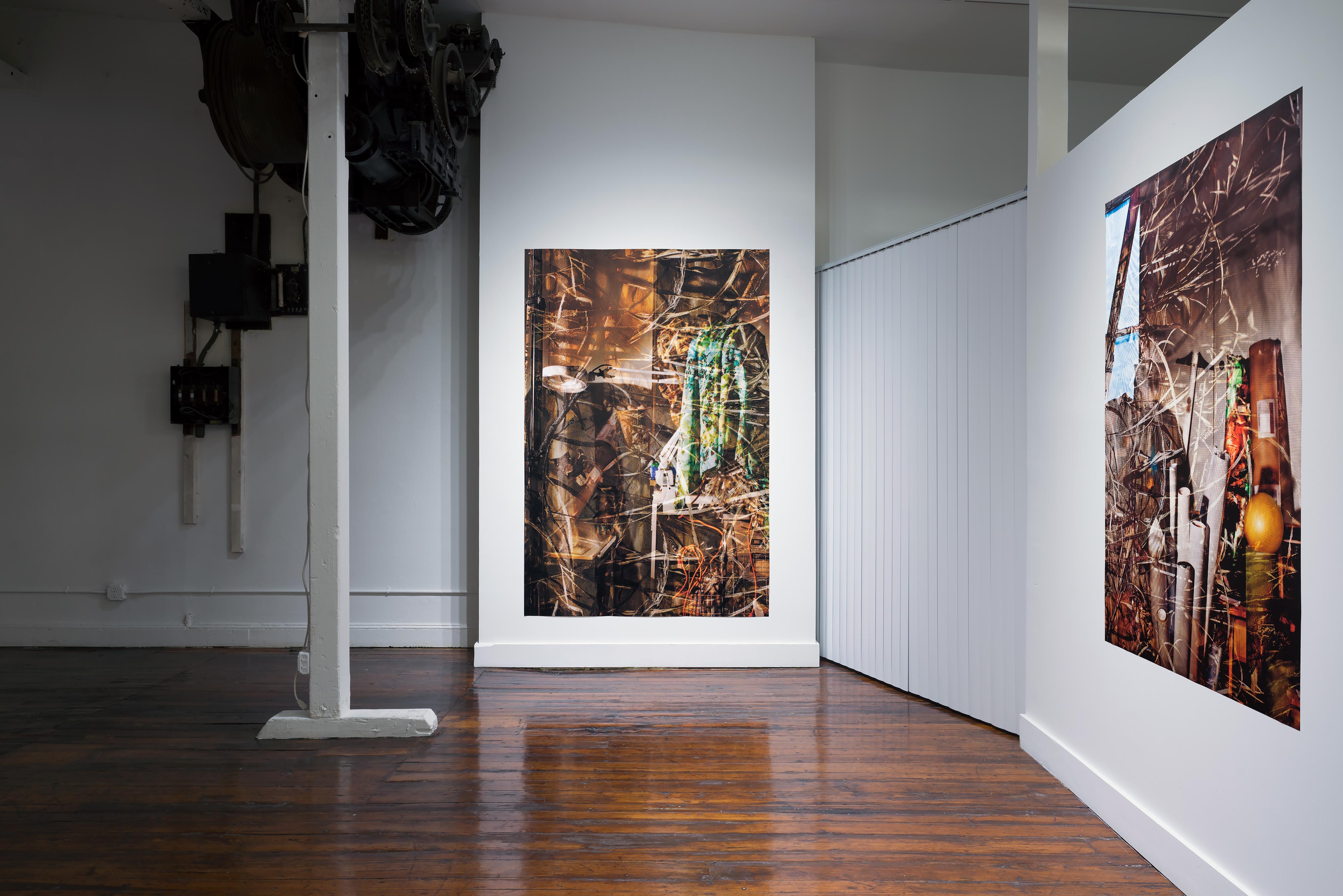 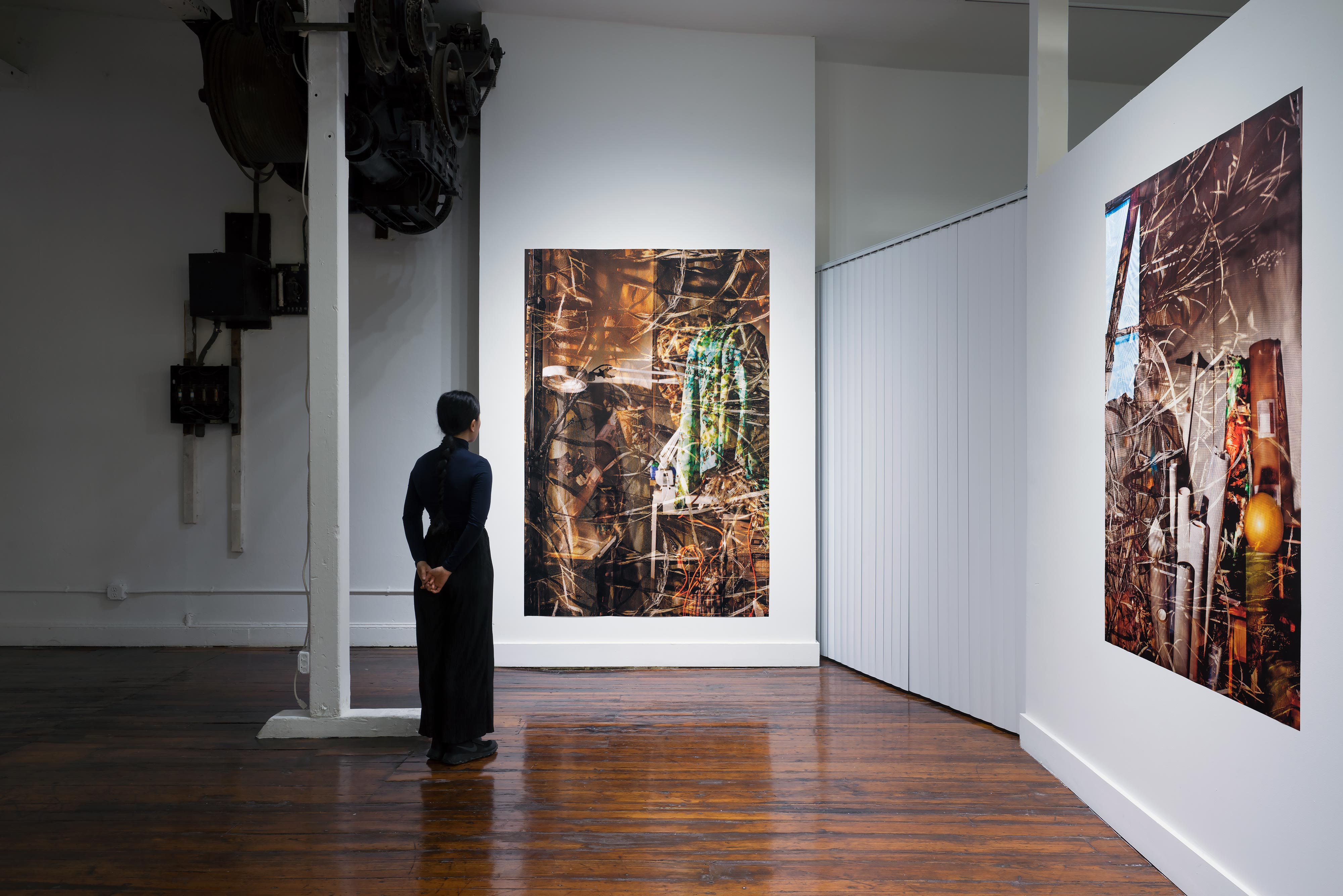 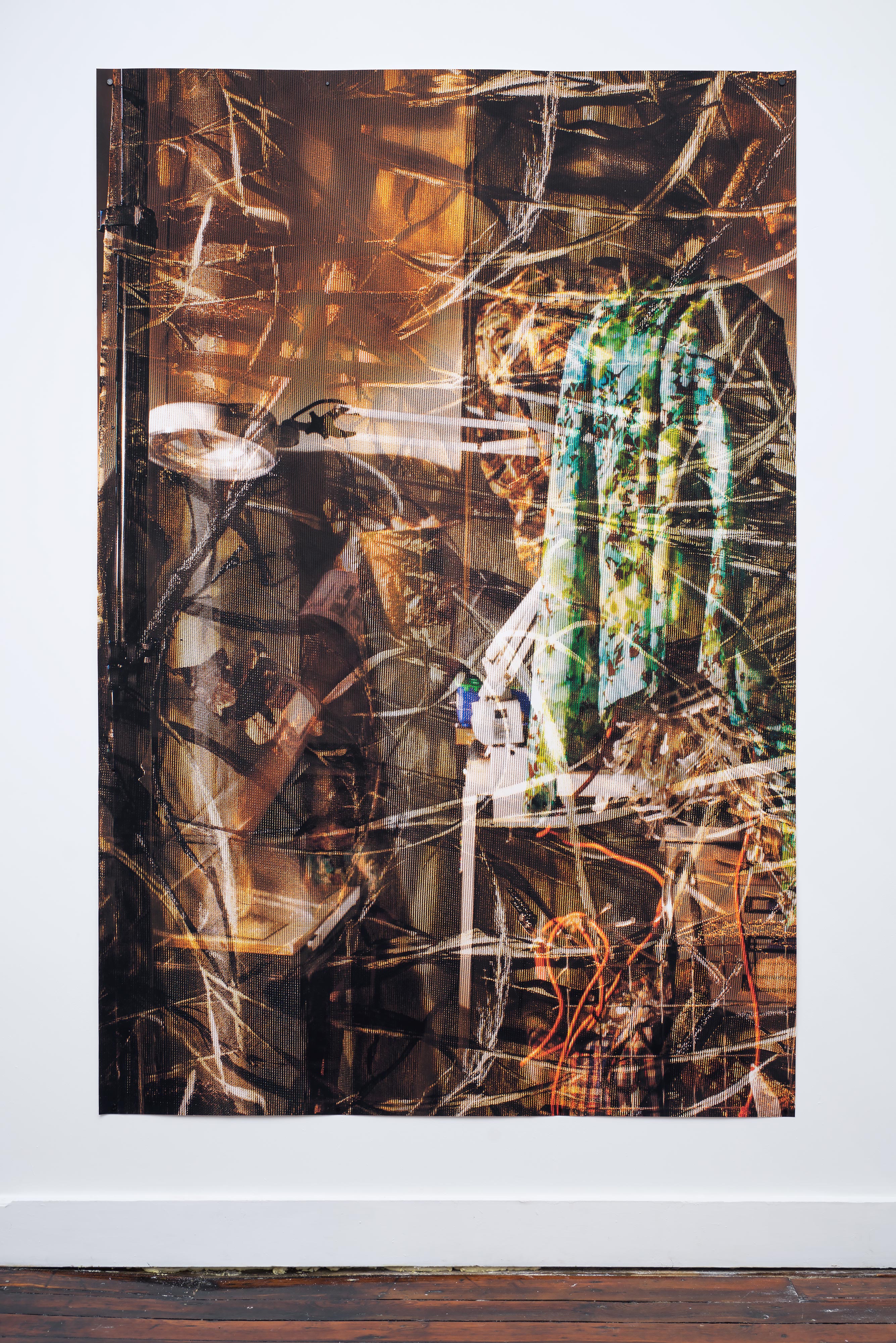 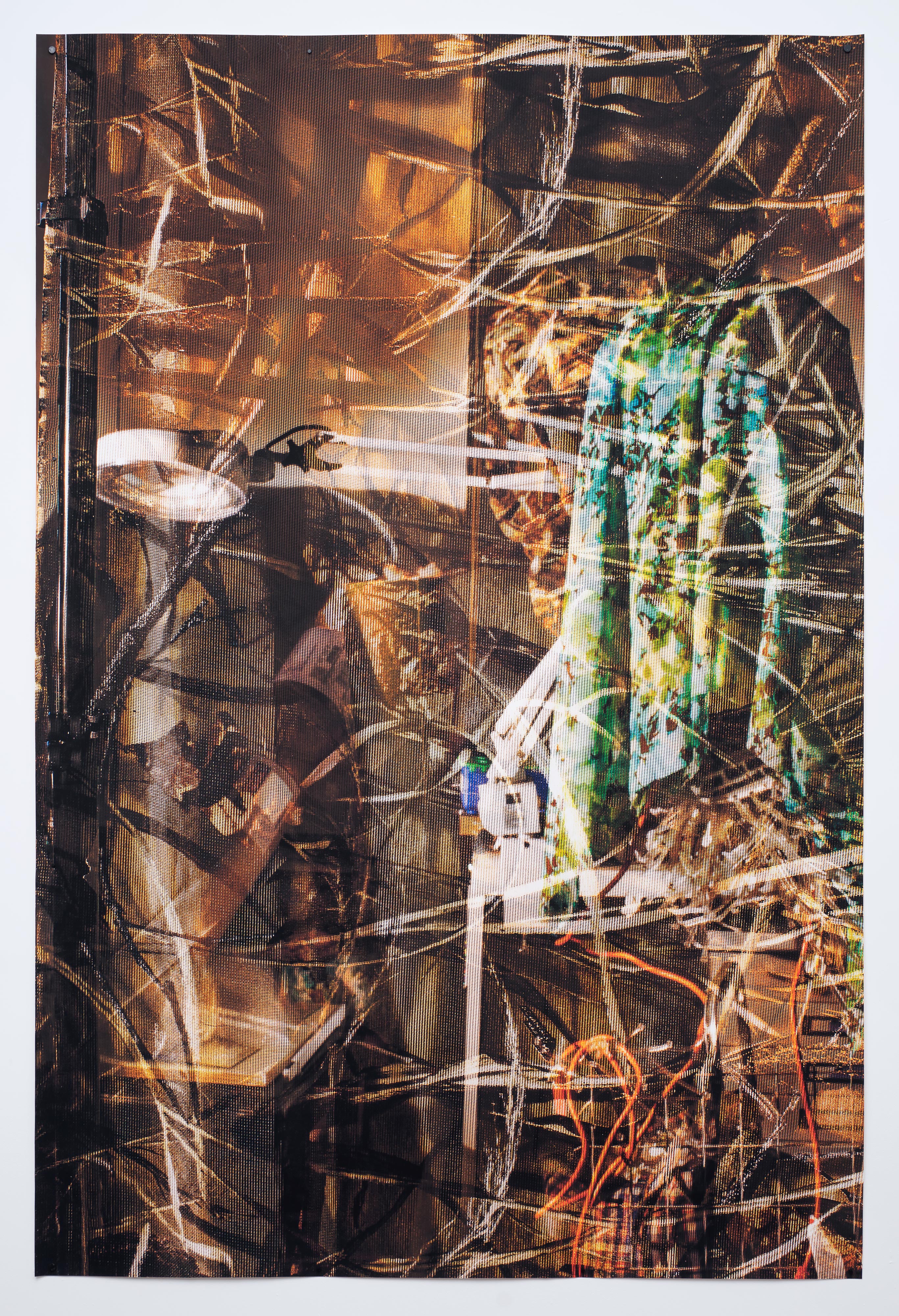 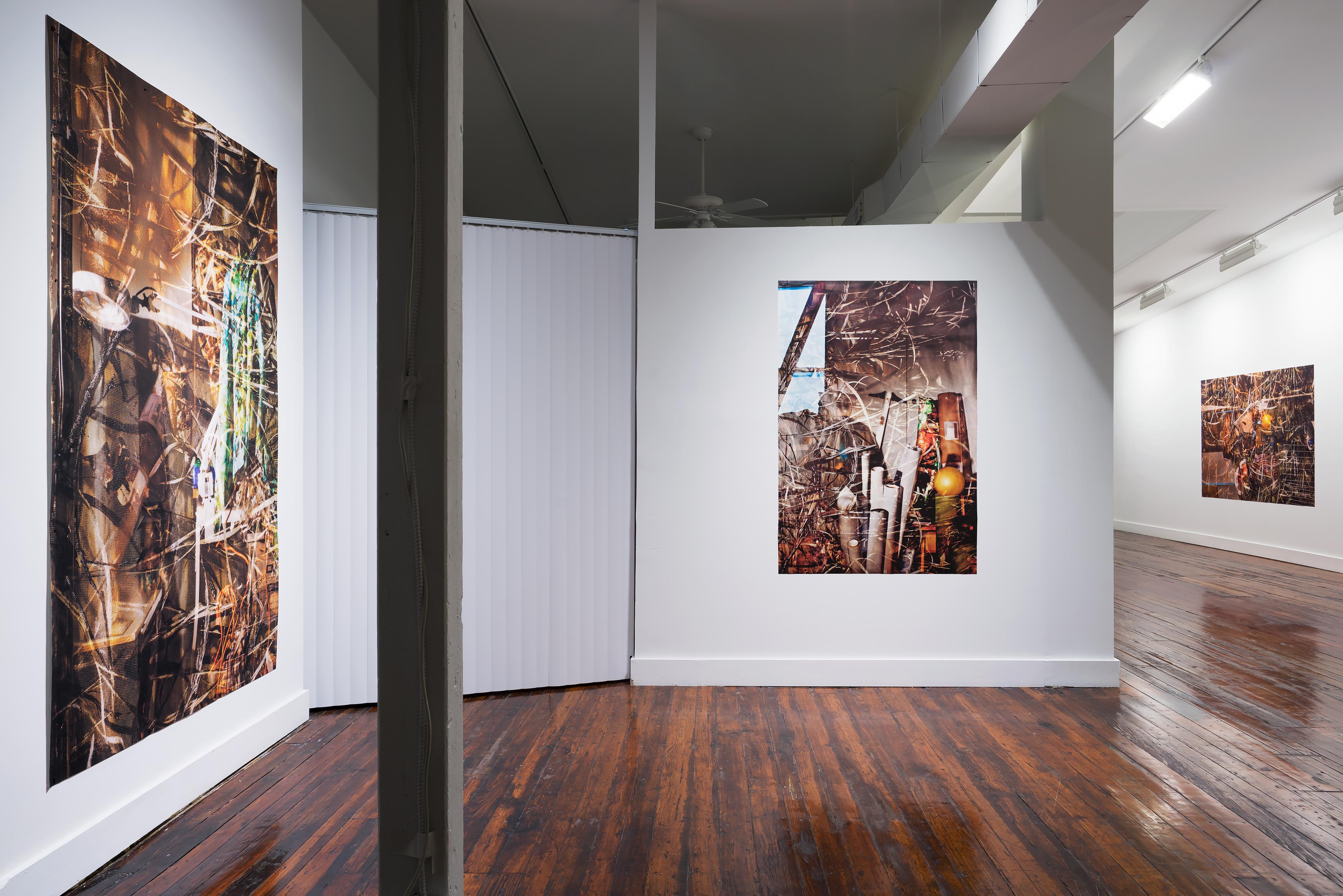 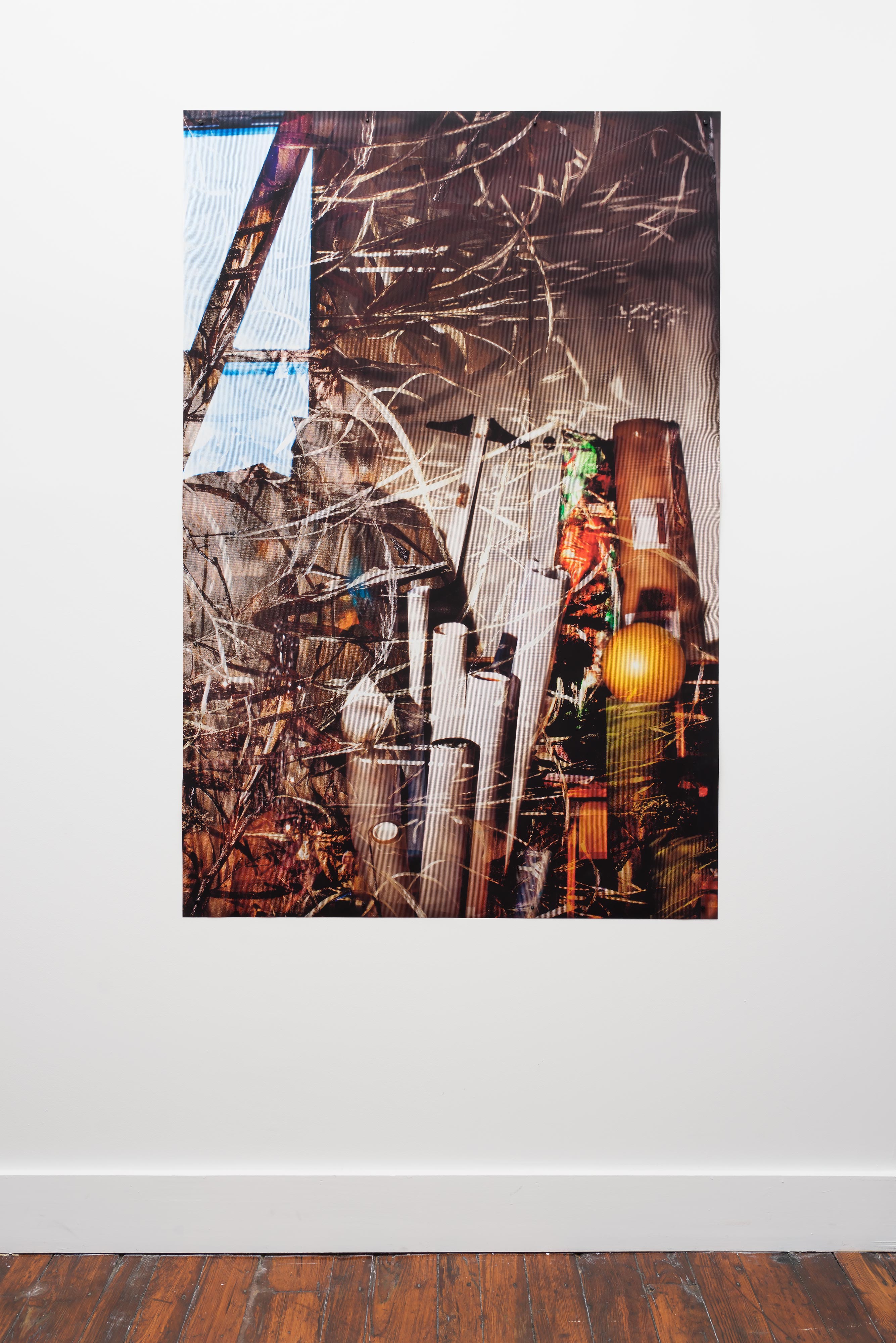 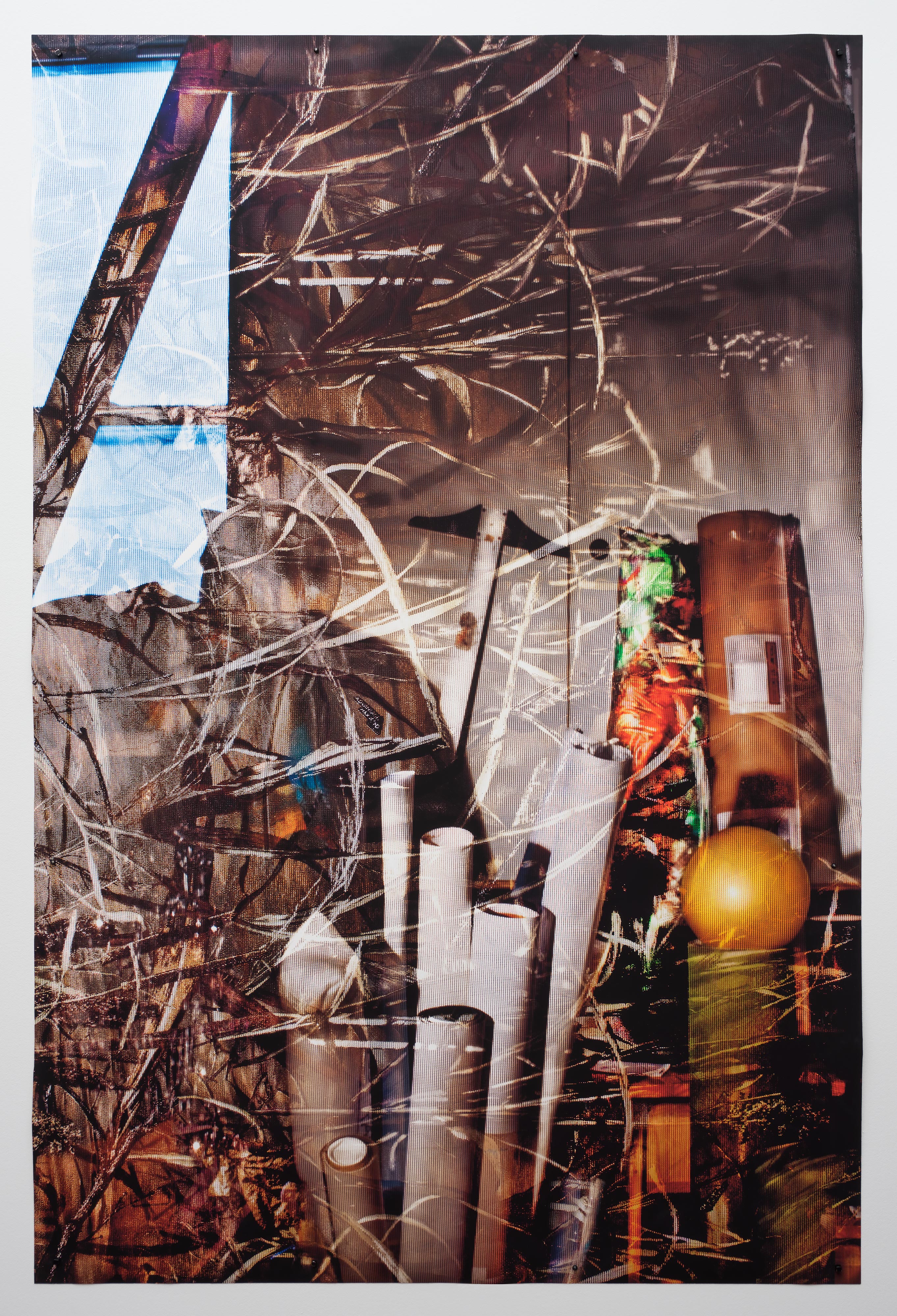 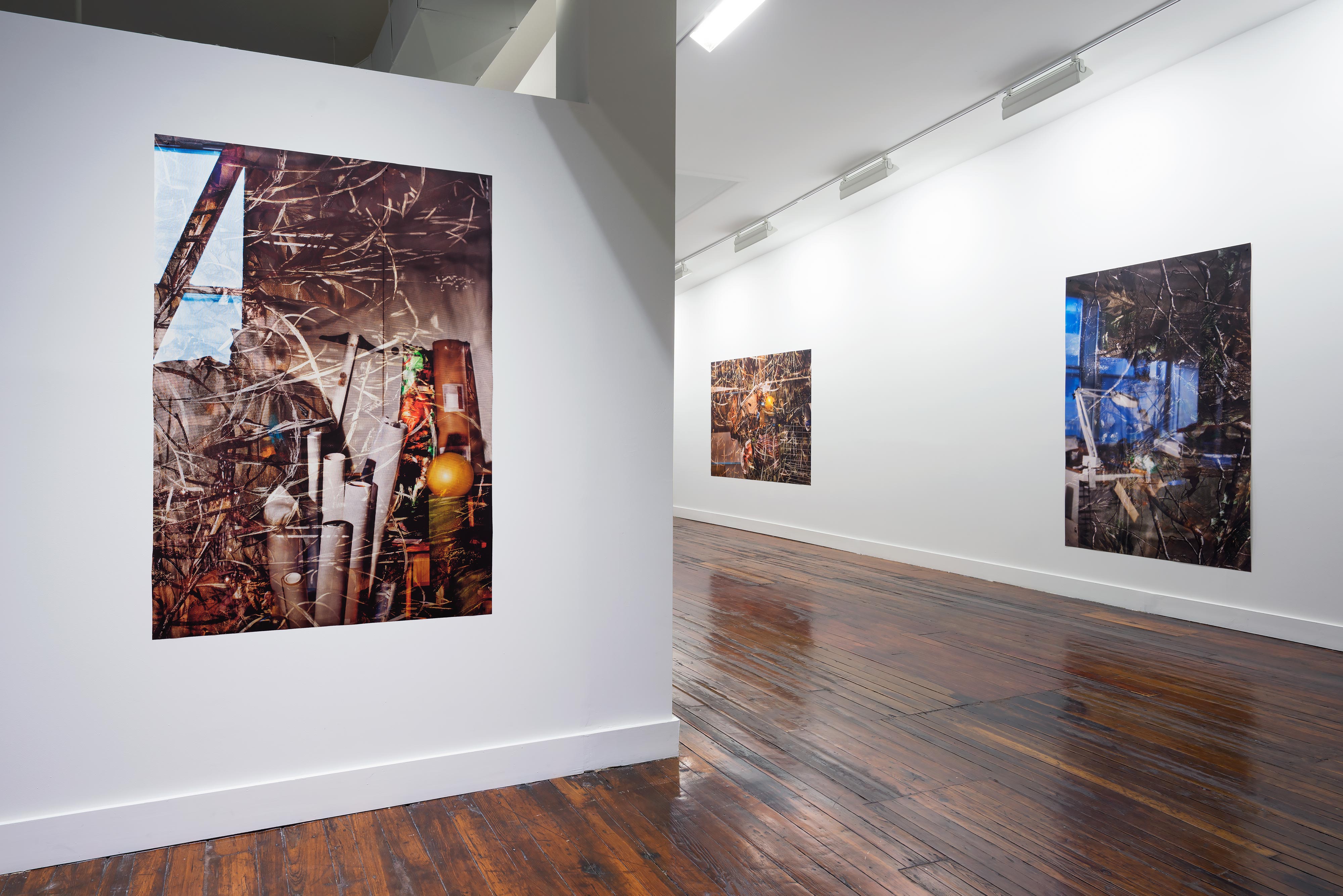 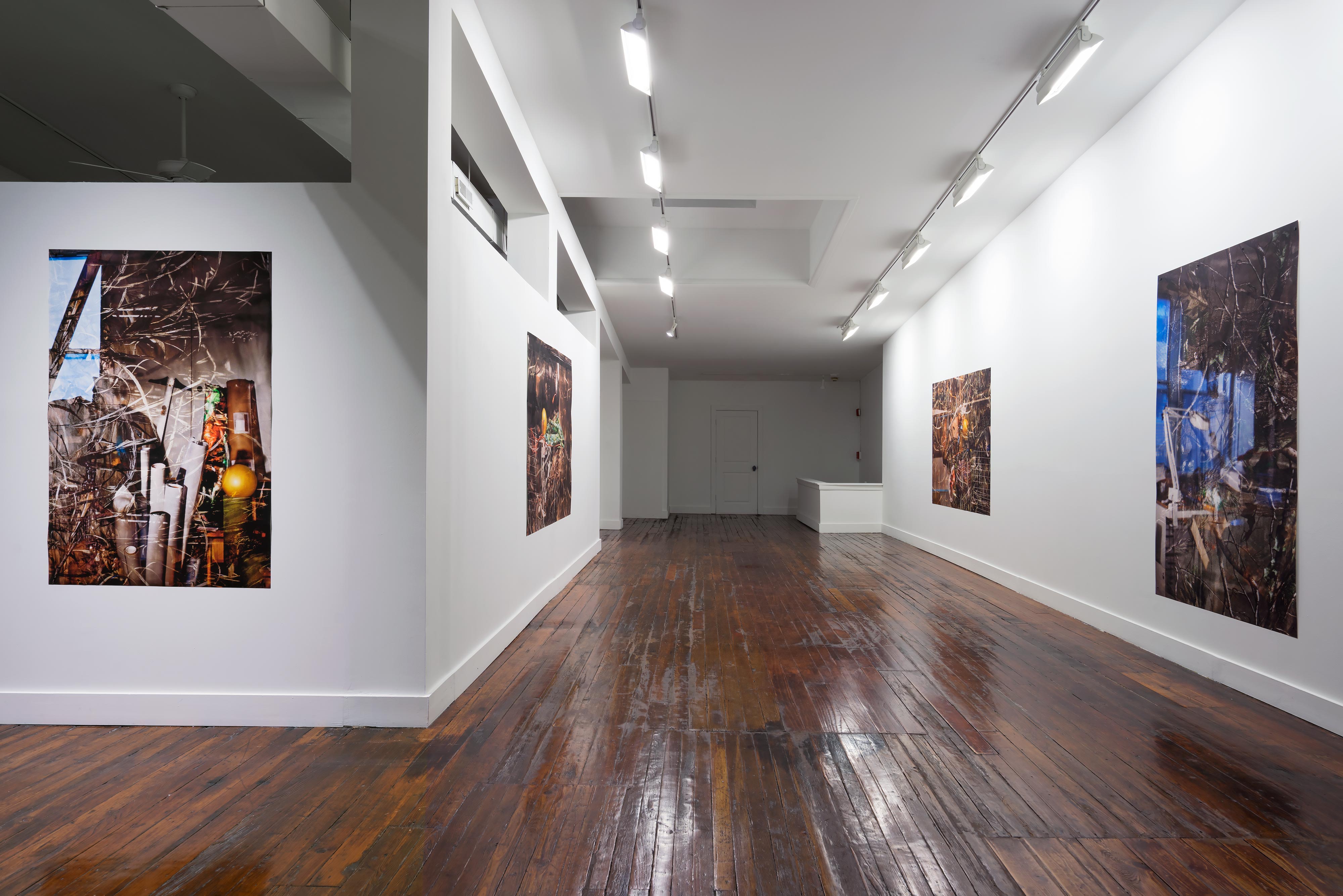 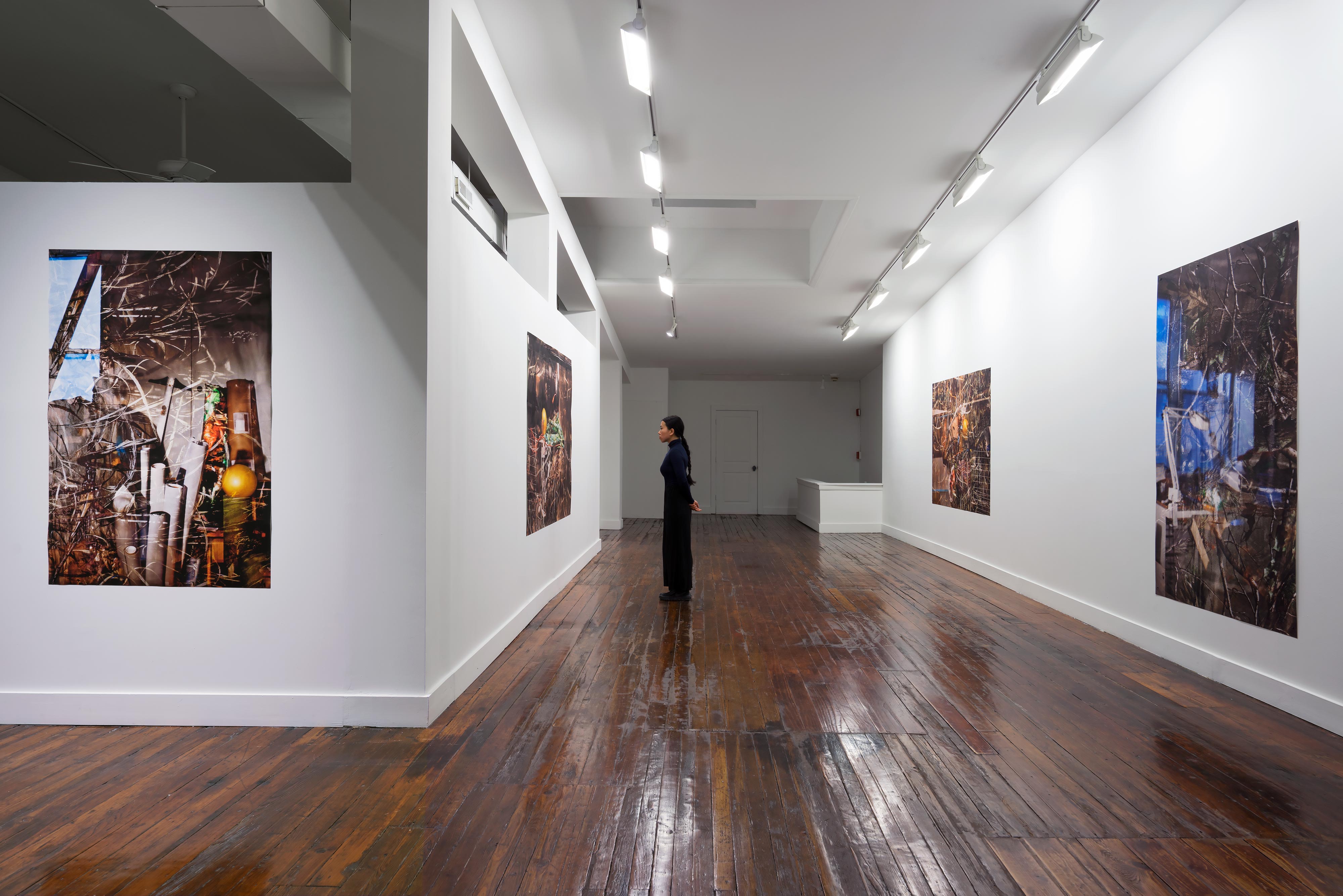 Lord Ludd is pleased to present a solo exhibition of new work by Ellen Brooks. This will be the artist’s first solo presentation in Philadelphia and first time showing with the gallery. The exhibition will open with a reception on February 24th from 6pm to 8pm, and will continue through April 1, 2017.

Ellen Brooks’ Screens is comprised of a new series of large format photographs (all 2012-2017) which she produced by photographing detritus in her Brooklyn studio through commercially available screens imprinted with images of foliage derived from hunting paraphernalia. The density of the prints rivals action painting while generating a dialogue with digital imaging technology and multi layered Photoshop documents, yet there is no digital manipulation involved in the process—Brooks' photographs are made entirely in studio, in a single exposure, without the aid of computers or software.

Active in New York since 1982 and working concurrently with the Pictures Generation artists, Brooks’ new work is an extension of Screens (1986-1994), an earlier series where the artist re-photographed source images through a dense black screen, which allowed her to distill subject matter into a “crystalline composite of color” as a means of addressing issues of cultural longing, over-cultivation, and mass media’s invasive packaging of beauty through magazines and theme calendars.

In retrospect, this early series poetically foreshadowed the present, where so much content is routinely mediated by the pixel based screens of computers, smartphones, and tablets. Brooks’ new work takes this interest a step further by creating images which collapse the intrinsic and extrinsic, nodding to the screen as the ultimate mediator, which the artist describes as a “leveler of language.”

Since the onset of photography we have seen nature depicted profusely, from the earliest glass plate negatives, to pristine silver gelatin prints, to postcards, calendars, automotive ads and the like. Even the naming of Fuji film, after Japan’s largest volcanic mountain, implicitly tells the customer what they might want to take pictures of; that ultimate Other, impenetrable, sublime. It has been a staunch subject for tourists, hobbyists and artists. In fact, perhaps the reason Ghirri never liked nature photographs is because the history of images has in many ways been an ongoing document of the erasure of nature. Apple’s generic wallpaper image of El Capitan, one of the highest peaks in Yosemite National Park and the namesake of its now universal operating system, is a particularly perverse attempt at conciliating our desire for nature, while evermore engrossed by screens.

In her latest body of work, Ellen Brooks’ Screens puts to use an image of nature that is at once a rather debased reproduction, yet functions reliably in the wild. I’m referring to the transparent camouflage nets the artist uses to obscure, abstract and inevitably transform into another image altogether. While taking in the world of these beautiful and densely detailed photographs, the natural inclination today is to assume ostensible layers in Photoshop being applied and painted throughout. However, Brooks’ process is all done in-camera, as it were, in the confines of her studio in Brooklyn, that distant terrain beyond the river from Manhattan, where she had worked in several modes for many years prior.

Like many artists of her generation, Ellen Brooks came of age at a moment where questioning and critiquing the various uses of images in media, entertainment and advertising, became a wellspring for expression and empowerment. Growing up in Los Angeles, Brooks was obsessed with all kinds of magazines, but was especially interested in how nature was presented. Various publications like House & Garden, Better Homes and Gardens, and other shelter magazines, tapped into a new market for gardening as a form of hobby, as well as showing off how the wealthy could surround themselves with the best sense of nature money could buy. The canyons and hills of Los Angeles display this concept perhaps more evidently than any other place in the country, in terms of the artifice of nature bleeding into the sprawl of the city. Manicured lawns abound, while more environmentally conscious homeowners use Astroturf to save water and receive a tax rebate to boot. Consider the palm tree, an emblem of the region, is not even native to Southern California, but rather, was transported from Mexico (fan palm) and the Canary Islands (date palm), and planted throughout the city purely for aesthetic and decorative purposes. As the life span of the original crop of palm trees from the 1930’s comes close to its end, questions about sustaining and planting new palms come under scrutiny, since they provide no shade, and the urban heat island effect of Los Angeles has increased significantly since. Projecting this kind of aspirational version of nature onto the landscape informed the work of many photographic artists, from New Topographics, which drew from the sober gaze of vernacular real estate images, to social landscape photographers who saw what was posed as the real world as kind of curious figment. Meanwhile the artists that became known as the Pictures Generation undermined idyllic cultural tropes by appropriating or re-presenting magazine and advertising pictures, to use it against itself. Many of these ideas bring to mind Baudrillard’s Simulacra and Simulation, which argued that to navigate our contemporary culture is to more often than not, find ourselves immersed in a reality of copies without an original. Or, that nature is receding, copied, confined and commoditized.

By appropriating camouflage netting as a veil to enhance the picture plane, Ellen Brooks has adopted a remarkably cunning strategy. The process itself is fairly straightforward. The artist drapes the screen in front of the camera and proceeds to explore the amalgamation of objects and other bodies of work within her studio. For an artist who identifies as a conceptualist, it is somewhat amusing that Brooks insists she does not alter any of the objects in the studio for the making of the picture. Things are how they are. The only intervention is the thin material obstructing the view. It is relevant to note that this material can be found easily online or at outdoors supply stores. Among the various uses by customers who reviewed the large camouflage tarps, were World War II celebrations, going away and coming home parties for soldiers in the Army, tailgating, home decoration, and mostly hunting, namely, coyote, deer, wild turkey and waterfowl hunting. To do an image search of this thing is to delve into a masculine realm of weekend warriors, exceedingly decked in camouflage, intent on conquering some aspect of nature that eludes most of us in our daily lives. That a woman artist has decided to use the same material to investigate the apparatus of her life’s work is both sharp-witted and gratifying. But lets take it further. Camouflage itself may very well be the lowest echelon of quality in terms of image reproduction, while achieving the maximum level of deception in the world. It is a constructed image that enters and plays along with nature, an image attempting not to represent, but to pass as the real, with deadly consequences.

A customer review written by the artist herself as to how and why she is using this material might look something like this: “I was looking for a mass produced, synthetic, see-through image to mediate ideas of nature and concealment and elaborate on the innate illusory characteristic of photographs. The screen became a kind of veil one must pass through in order to discover the environment of my studio.” What resulted are a series of large scale, chaotic photographs, where within the image of nature, we can discern fragments of a studio and remnants of other bodies of work by a prolific artist. In his essay The Vanishing Point, Italian photographer Luigi Ghirri writes of the experience of looking at photographs that evokes the sensation of viewing Ellen Brooks’ Screens. Its “as if there were a gossamer-thin sheet of film between us and the landscape we observe, between the world and its representation – one which, paradoxically, does not stop us seeing clearly but, on the contrary, becomes the point of balance between vertigo and precision, time and space.” An unmistakable orange extension cord runs through the frame of an image, mimicking the frenzy of blurred, brown branches. Among the array of other objects, some clear, some abstract, is a shopping cart, wire fencing, a magnifying lamp, painter’s tape, the blue light of dusk through a window, and an inflatable yellow ball, like the one a child goes searching for deep in the woods, before finally giving up and letting it join the ever growing image of nature.

Ellen Brooks (b. 1946, Los Angeles) lives and works in New York. She has shown internationally, at galleries and institutions including the Museum of Modern Art (MOMA), the Whitney Museum of American Art, the Los Angeles Museum of Contemporary Art, the Centre Pompidou, Hauser & Wirth, Roth Gallery, Barbara Gladstone, Leslie Tonkonow, and Gallery Luisotti among many others. Her work is in the permanent collections of the MoMA, the Whitney, SFMoMA, the International Center of Photography, the National Museum of American Art, the Getty Museum, and the Albright Knox Museum among others.
ellenbrooks.net

Peter Baker (b. 1981, New York City) lives and works in Los Angeles. Peter Baker is an artist/photographer from New York City. He received a BA in Literature & Photography from SUNY Purchase in 2005, and an MFA from the Yale University School of Art in 2012. He has designed and taught courses at the International Center of Photography and has been a contributing writer for American Suburb X.
peterbaker.org