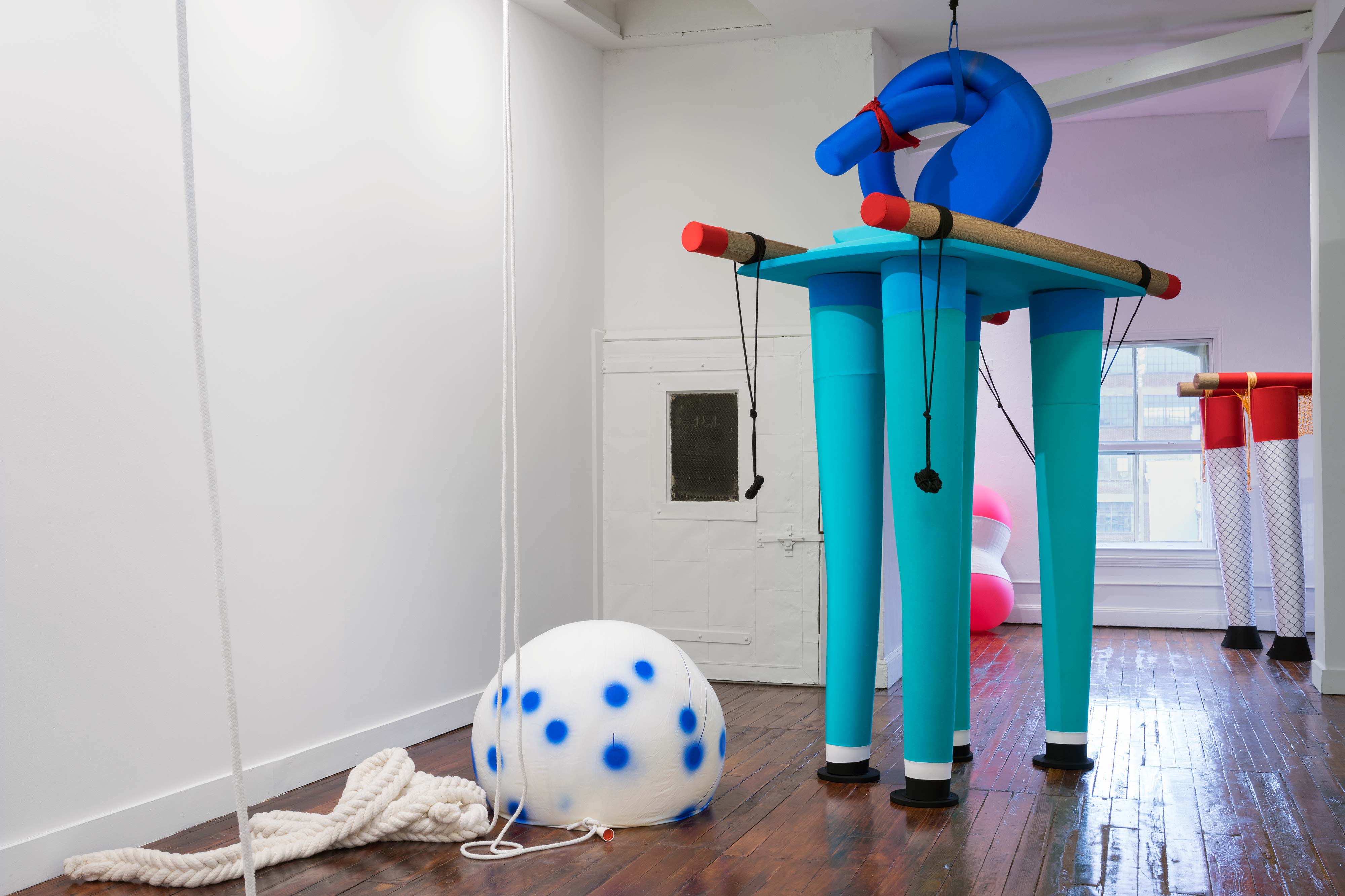 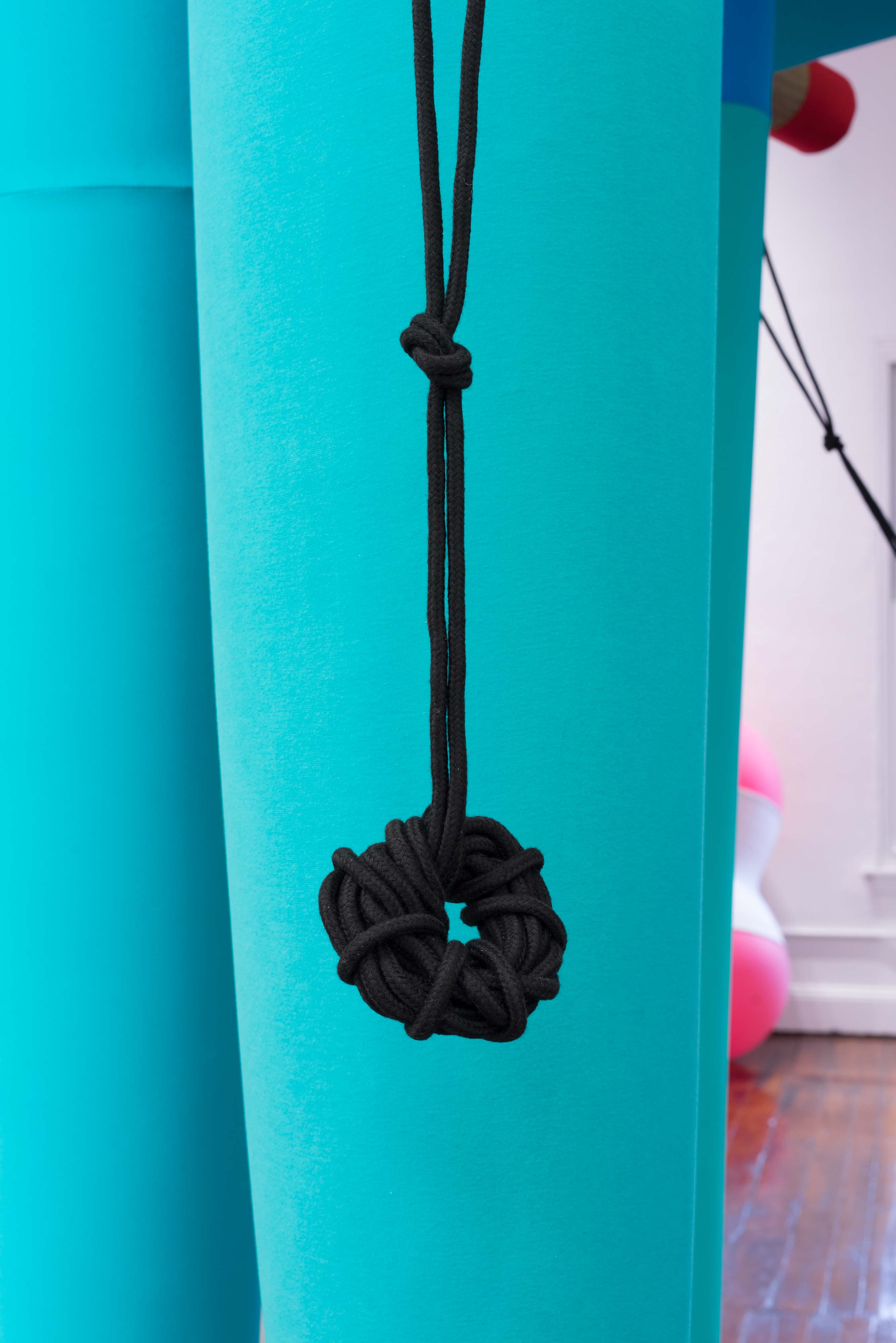 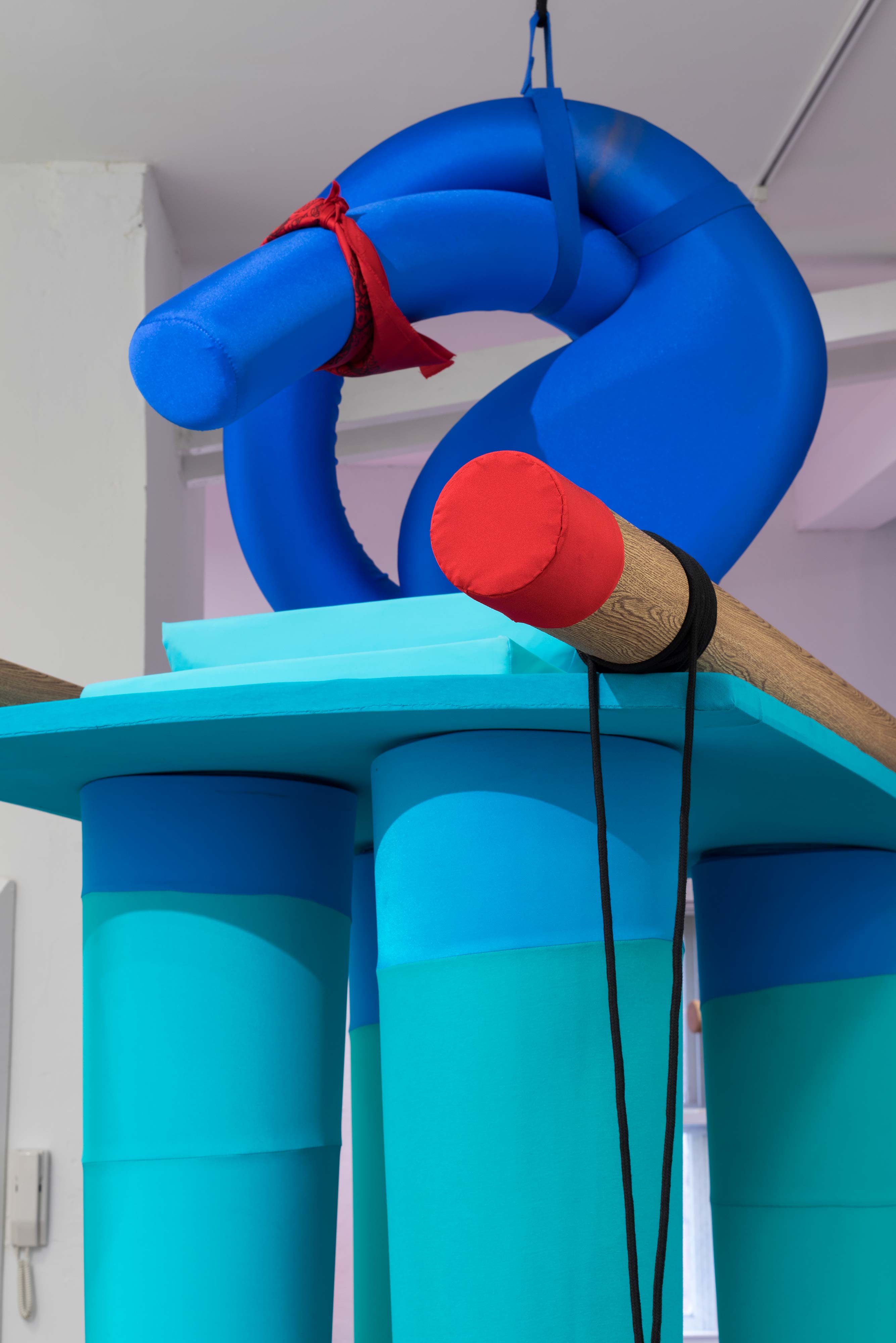 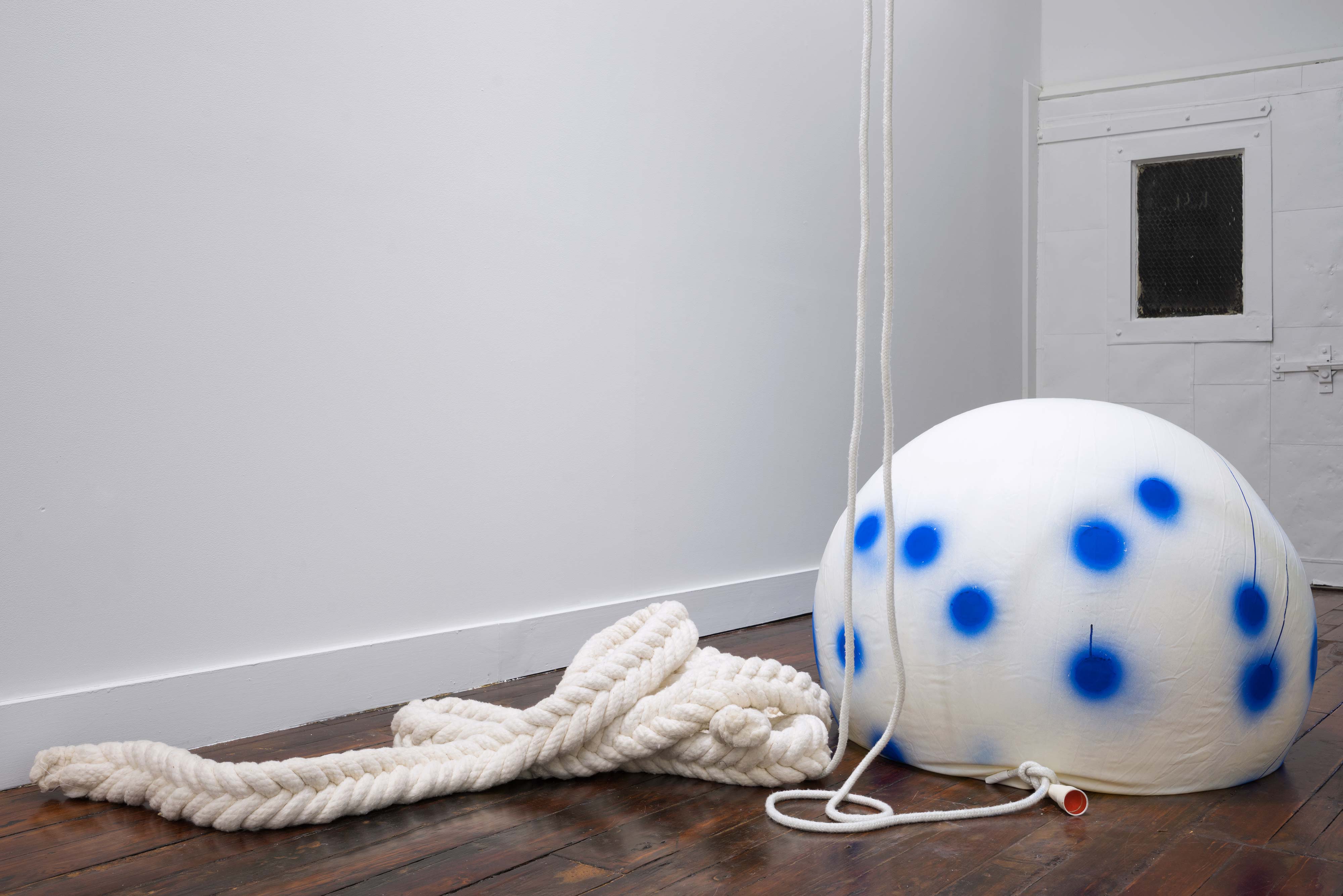 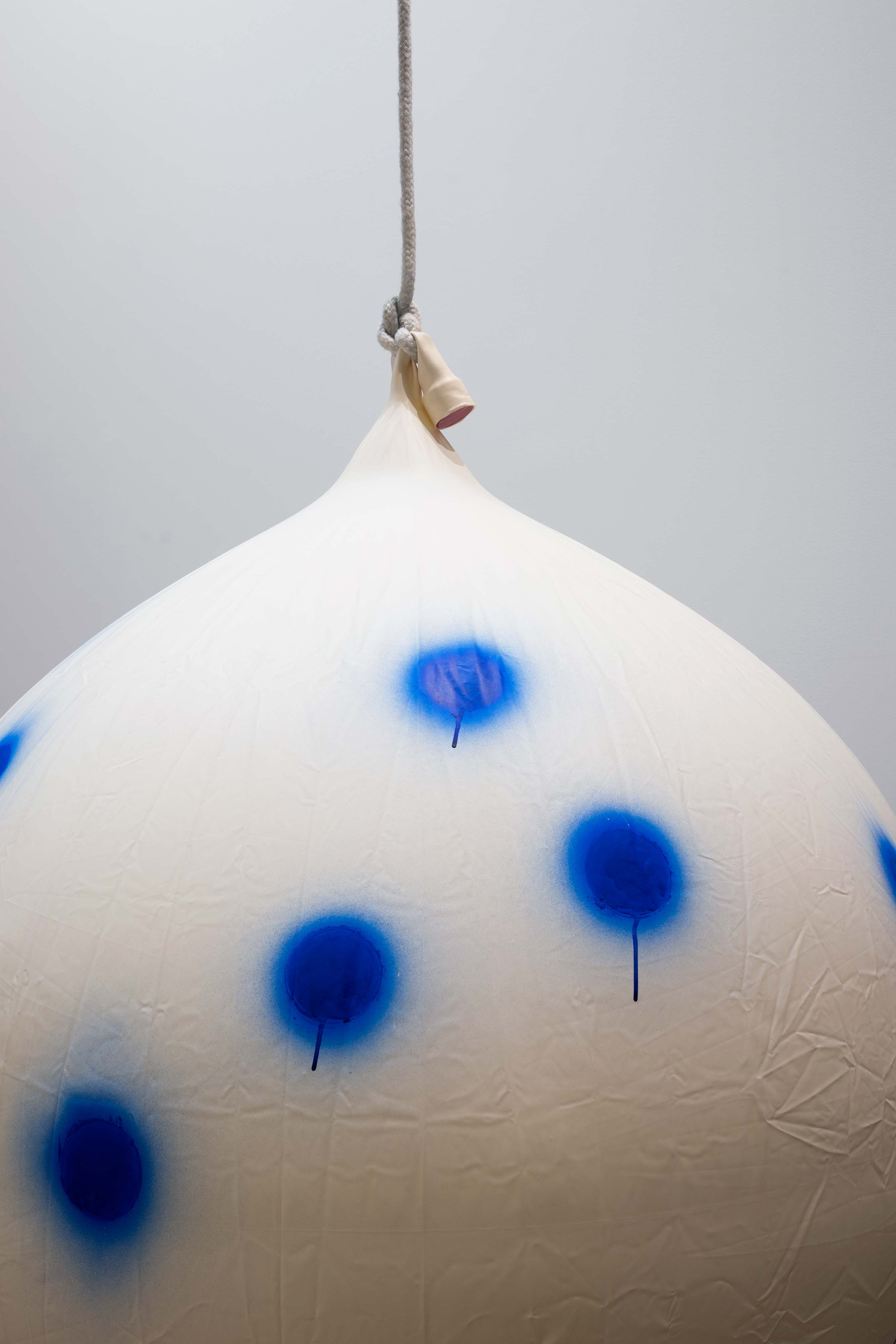 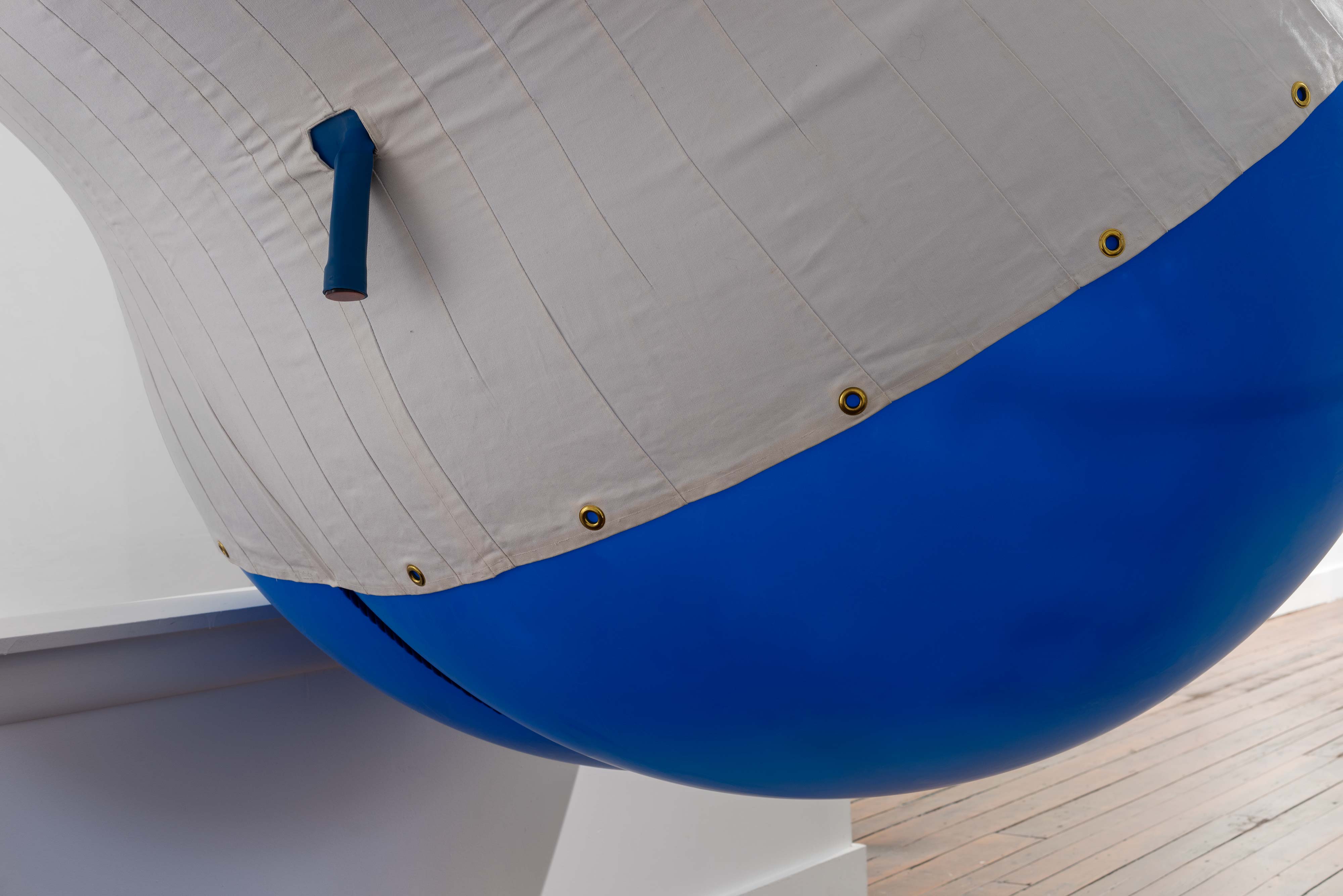 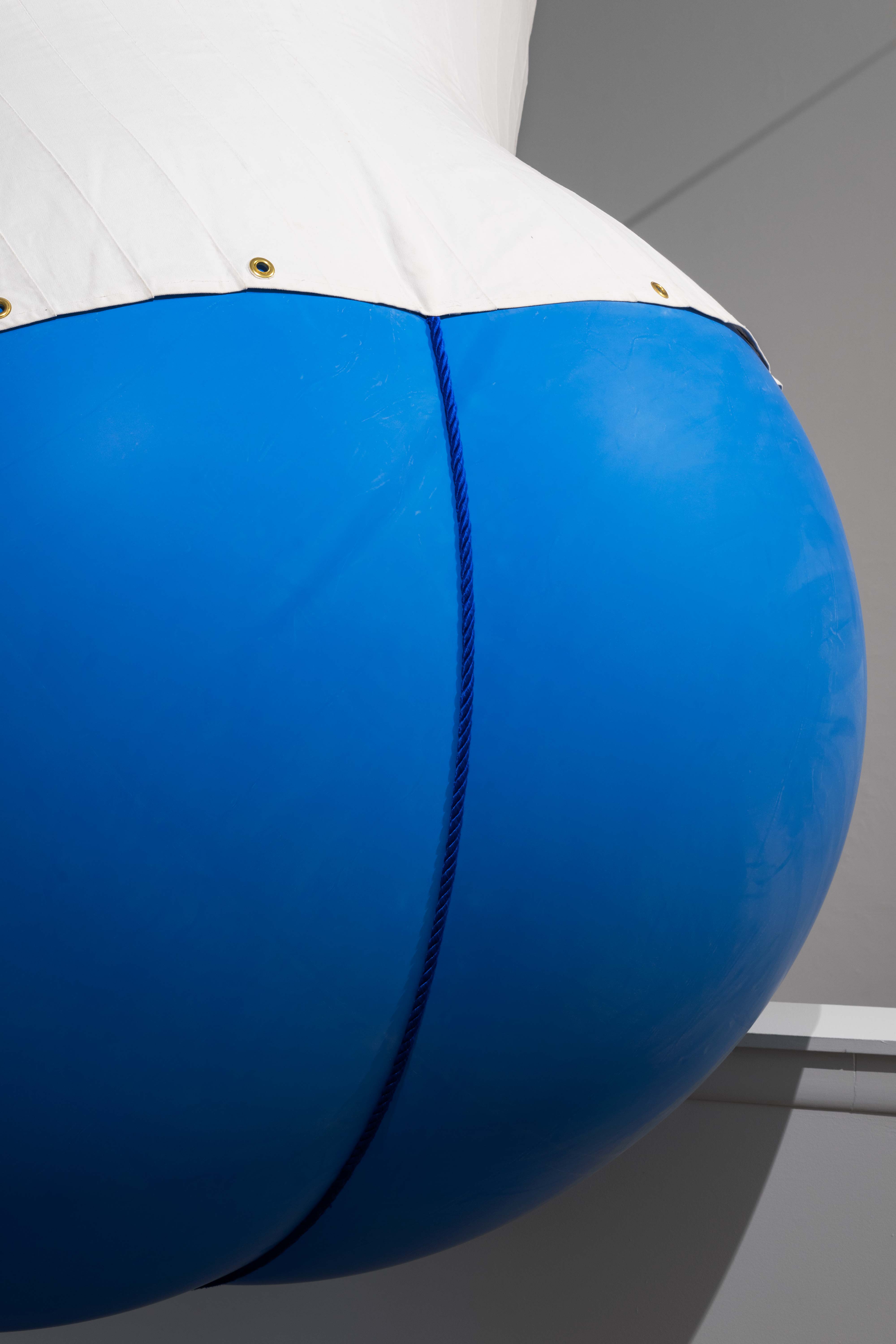 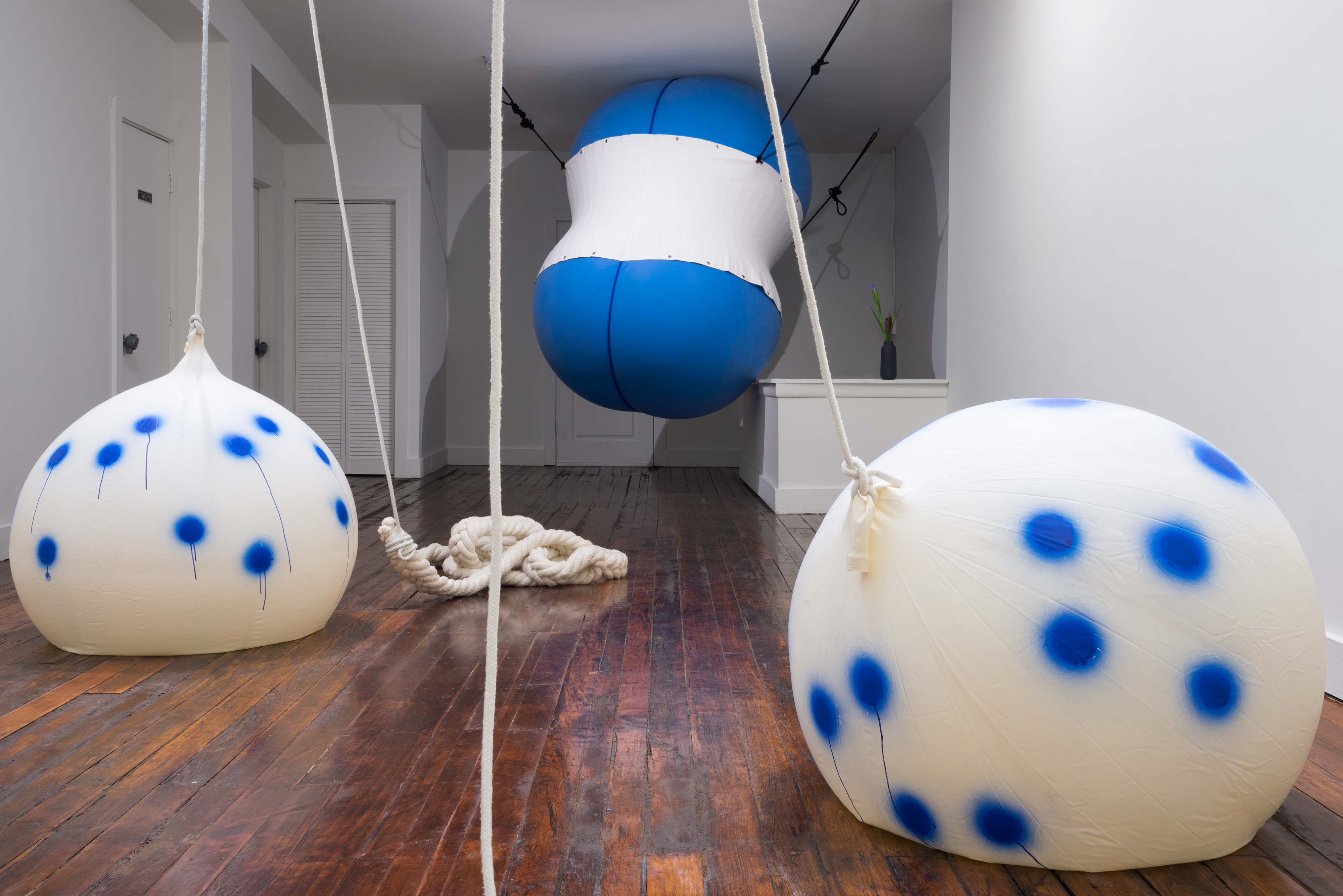 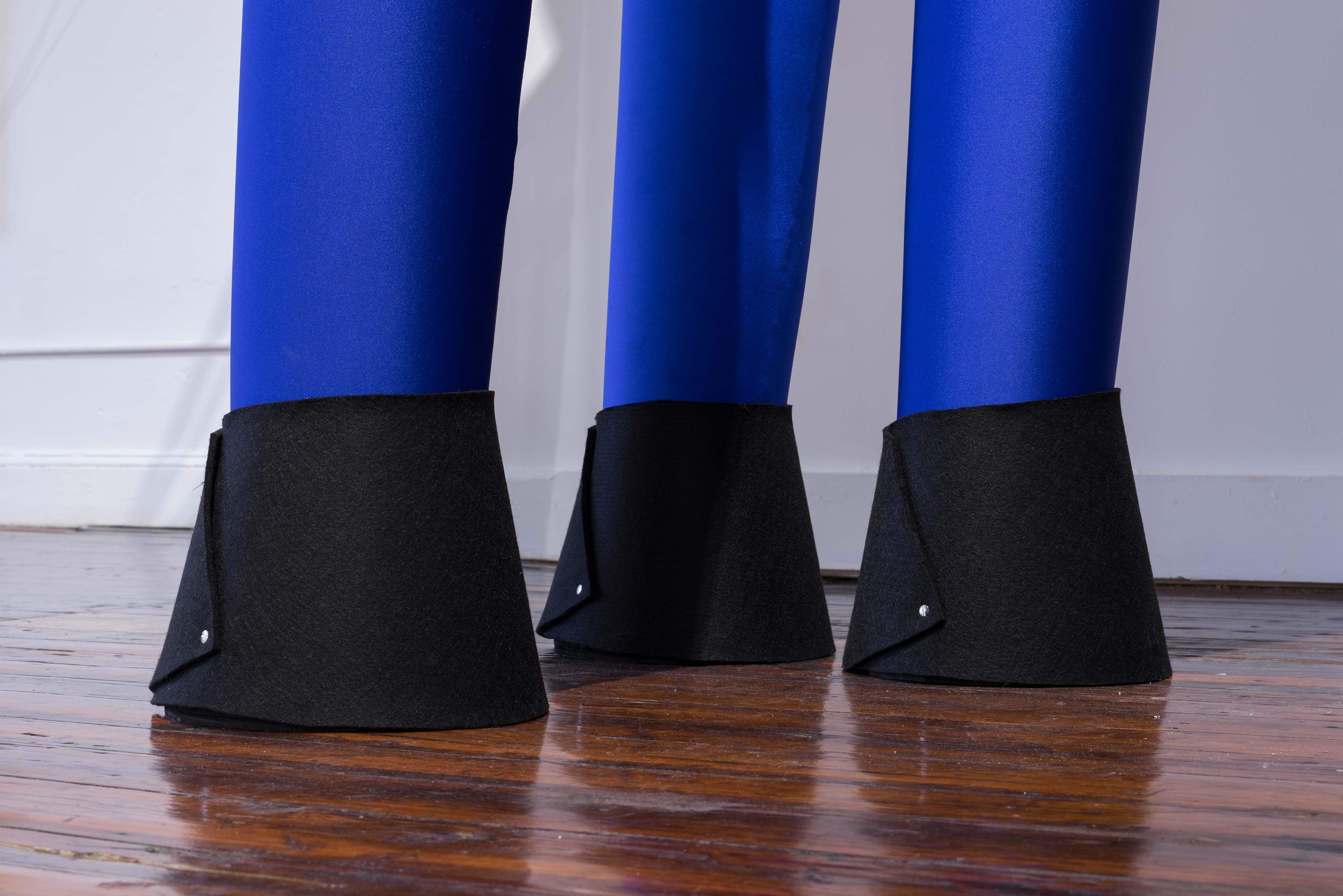 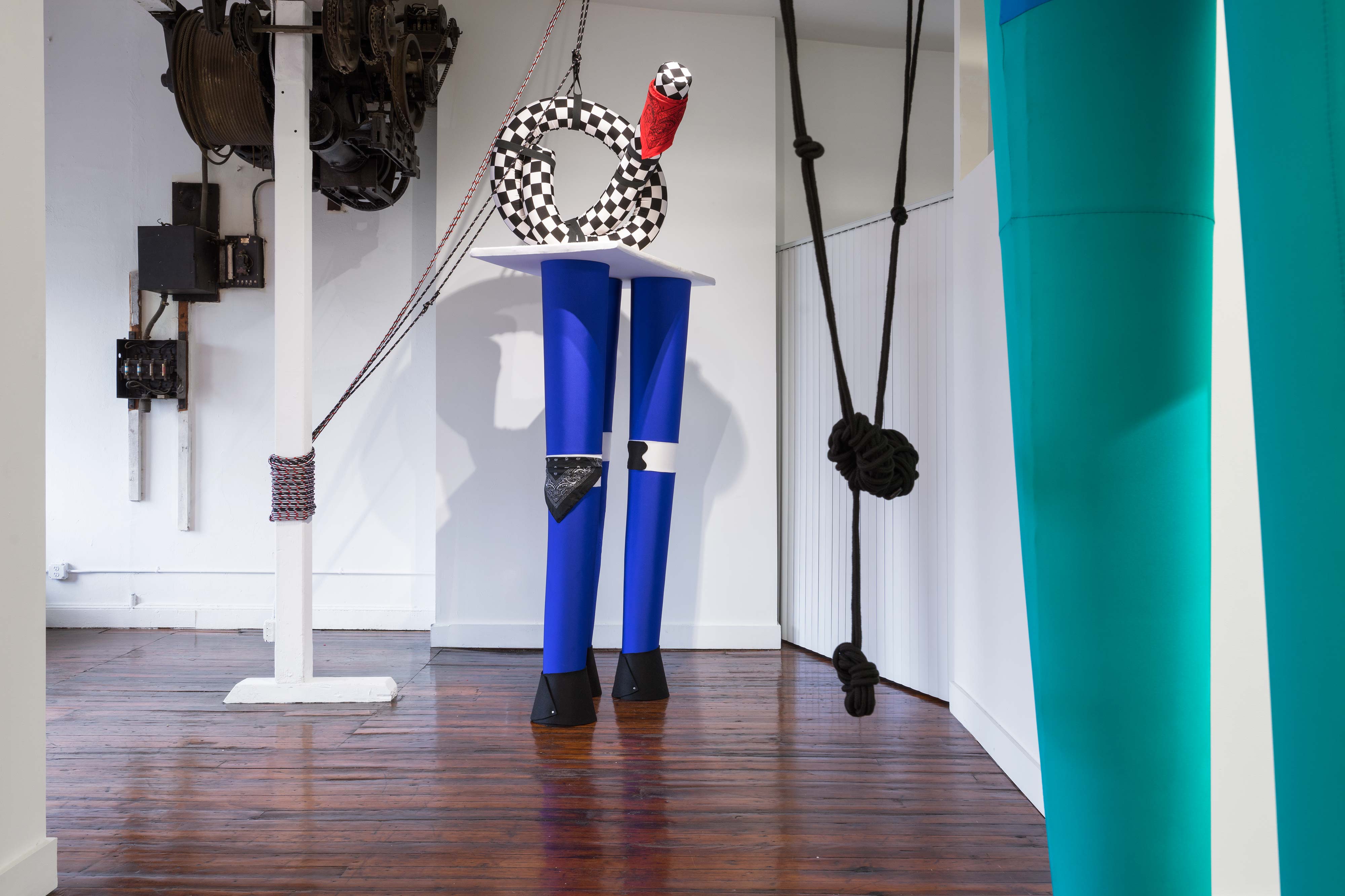 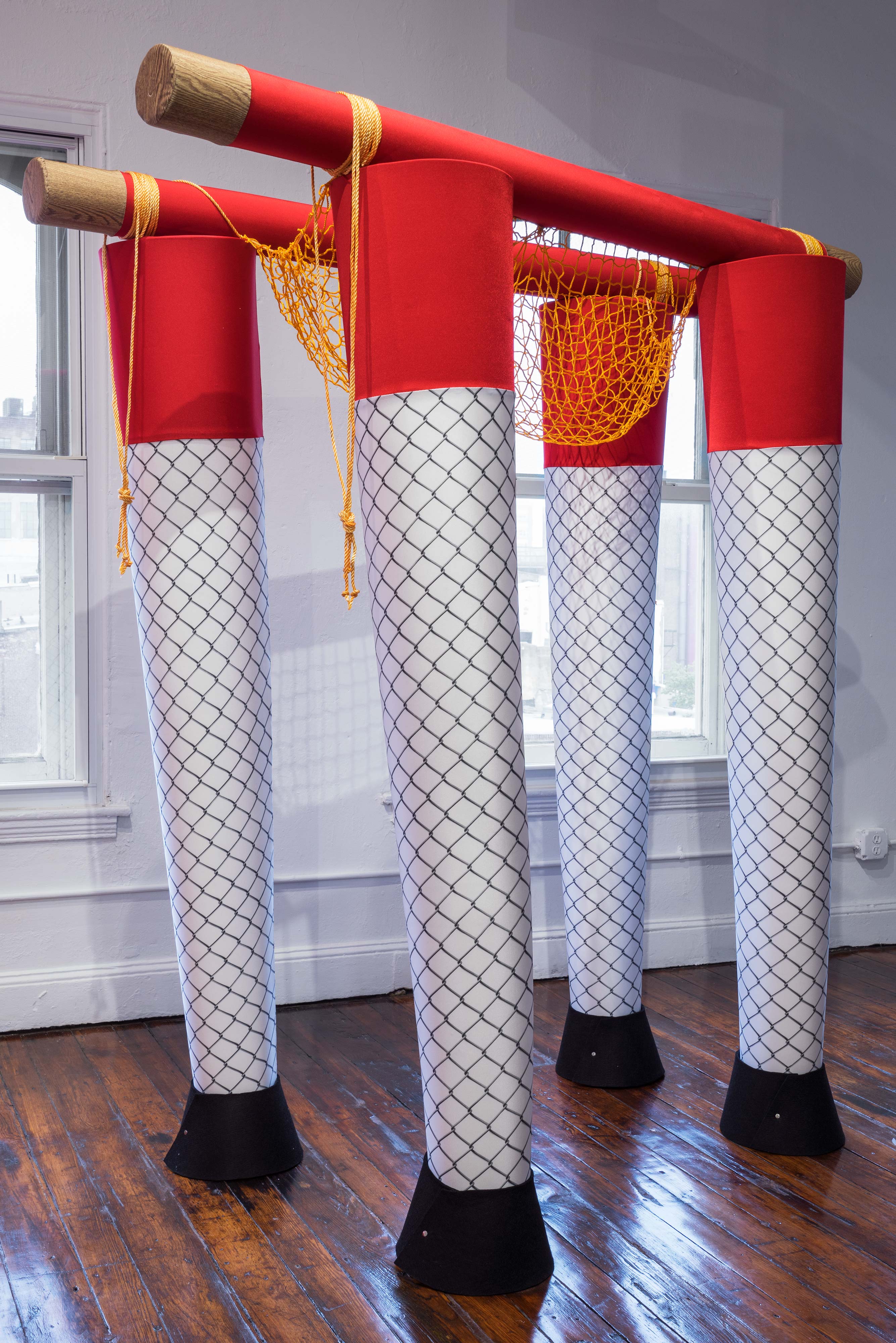 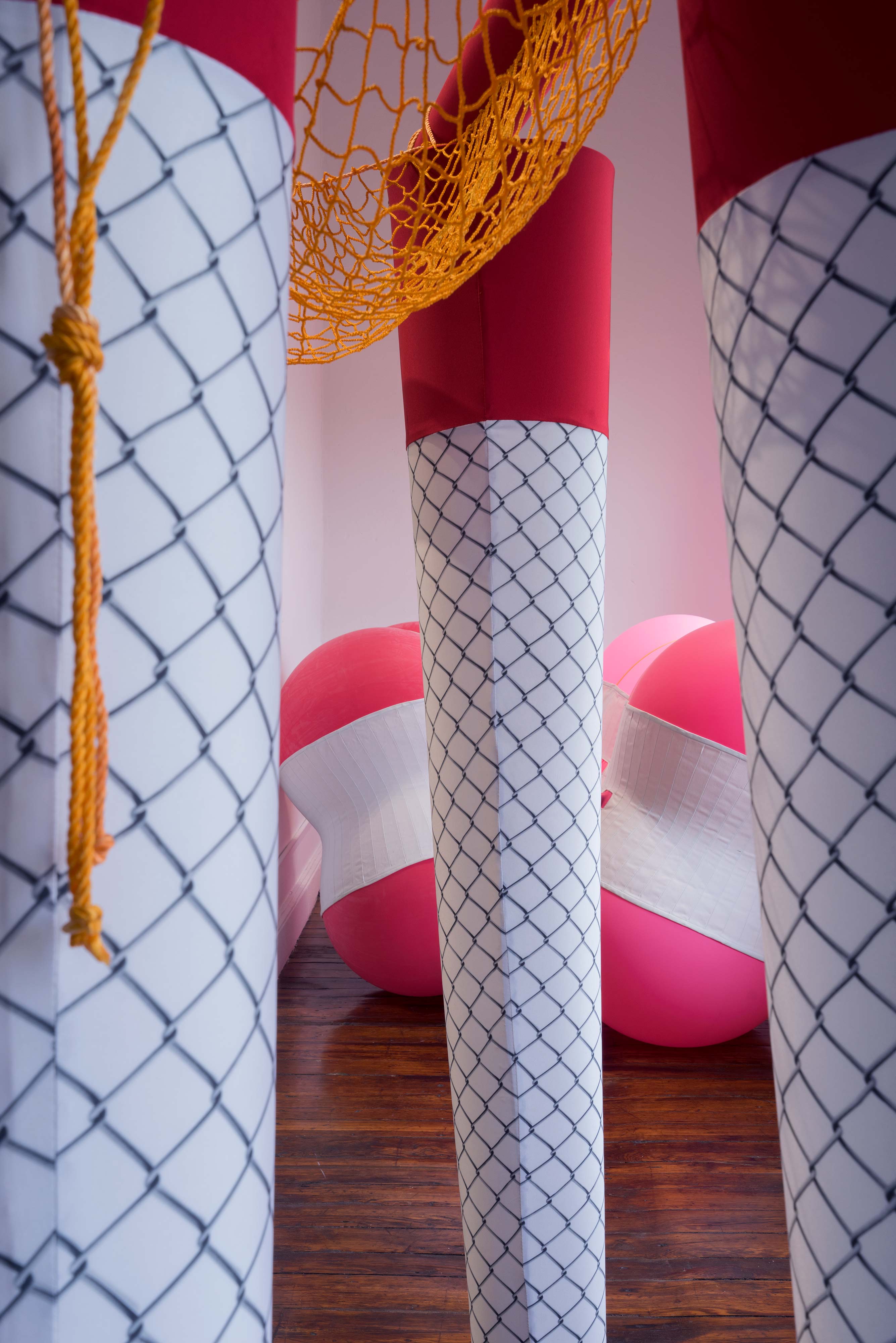 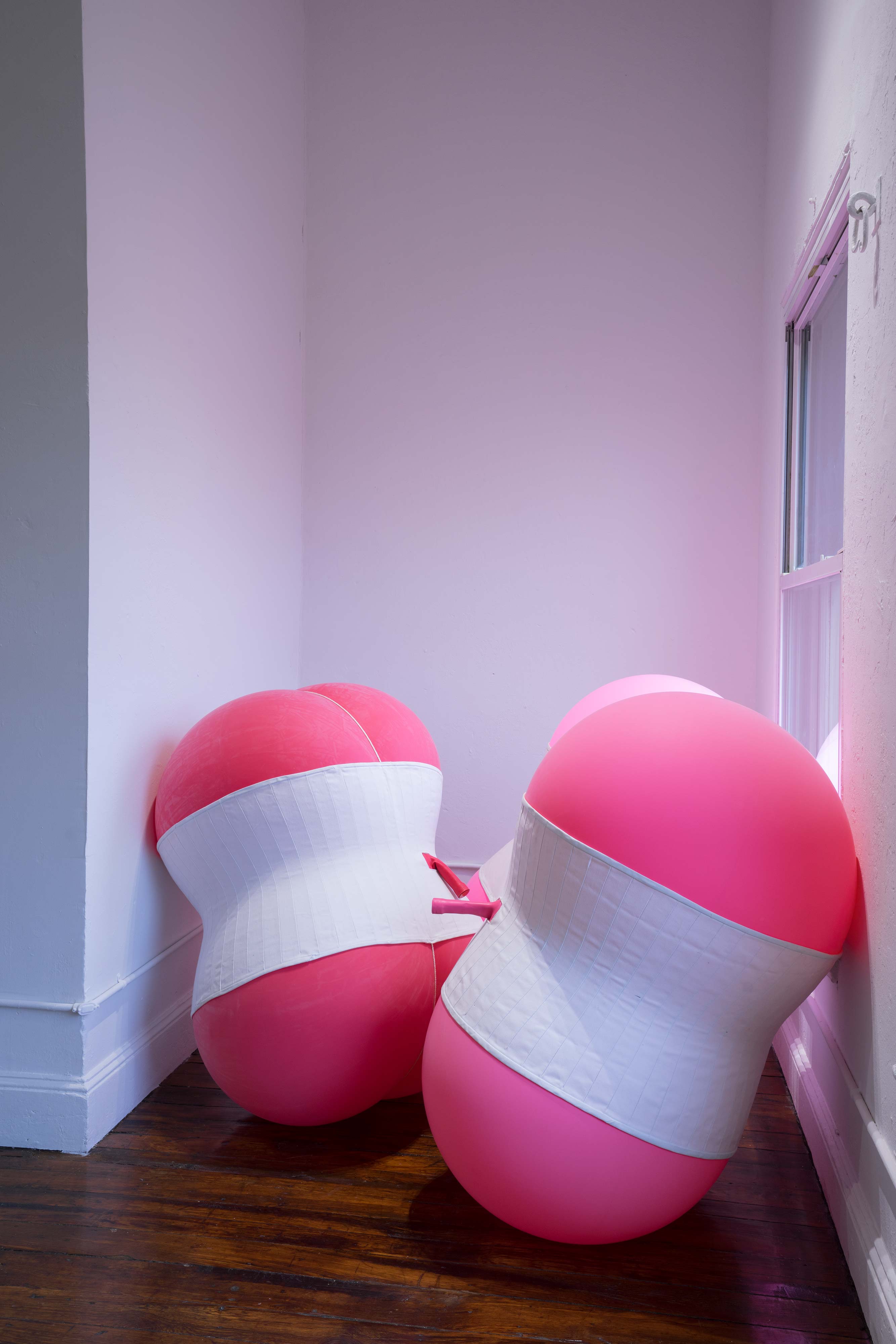 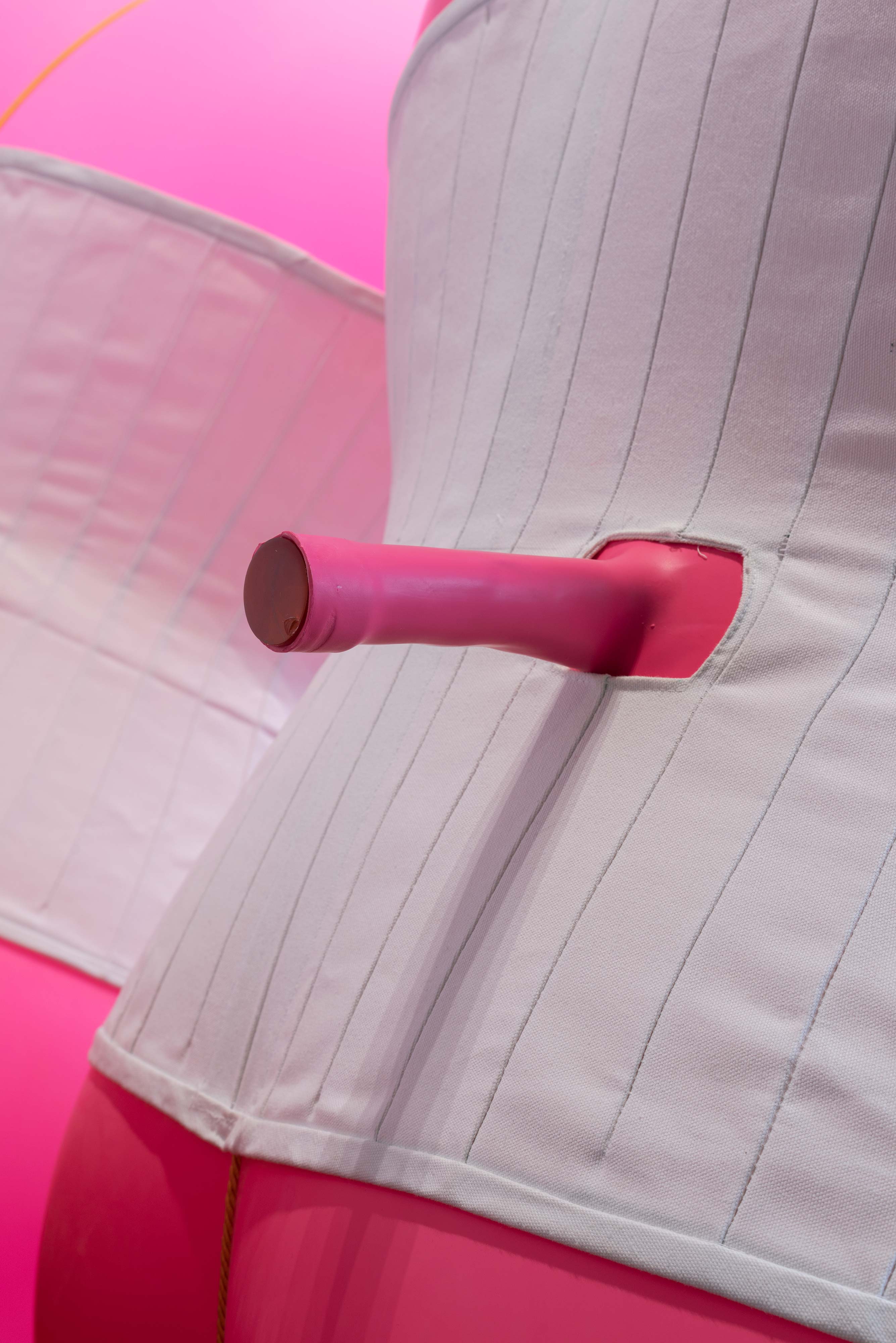 Expanding Forms
by Andria Hickey, curator and writer based in New York

I can’t help but think about Kim Kardashian when I look at Nancy Davidson’s sculptures. Not necessarily the person, but the form—that shiny, plastic, oiled-up, ballooning, photo-shopped version of Kim Kardashian that tried to break the internet. It’s not just that many of Davidson’s inflatable sculptures are bound and tied until they resemble an oversized (expanding?), apple-bottom, it’s also the artist’s astute understanding of popular culture, spectacle, and kitsch, and her dexterous approach to the malleability of latex and air. Not unlike the carnival mastery of Kim Kardashian’s image.

Davidson traffics in the language and subversion of pop images throughout her work, looking at female cultural icons like Mae West and Betty Boop—earlier prototypes who embodied a pageant of ideas about transgressive sexuality in the popular imagination. Davidson is best known for her zaftig inflatable sculptures that are both bosom and bottom, removed from the body like comical appendages large enough to take on their own persona. Tied with handcrafted ropes and adorned with delicate and restrictive accoutrements, the sculptures take shape with whale-bone corsets, lamé hot pants, spider web netting, woven thongs, lace stockings. The voluptuous objects—though light and tactile—are fantastic, enormous and imposing. They take up space, and like the elephant in the room, they can make you feel uncomfortable.

Davidson has no qualms about putting a giant ass in your face. In fact, she is often interested in engineering a moment of discomfort for the viewer, allowing her to play with the complicated relationships we have to sex and the spectacular role the female body occupies in our media landscape. In a country that produces the most pornography in the world, the irony of nipple censorship when depictions of the violent dismemberment of a living human body go without question reveals a complicated liminal space about women, sex and power. Davidson has been exploring this tension since the 1980’s with a tongue-in-cheek sensibility that embraces the subversive possibilities of sexual innuendo. Utilizing the female form to straddle the farcical and spectacular, she approaches her sculptures with an incisive and tactile self-reflexivity.

Nancy Davidson was born in Chicago in 1943. After the birth of her son she worked as a teacher for several years, but returned to school to study art in 1970 and began her MFA at Art Institute of Chicago in 1973. At the time, Davidson was some years older than her peers at the Art Institute and approached the gender politics of the emerging conceptual landscape from a different context, approaching ideas about the body through drawing, painting and installation. In the early 1980’s she began to explore sculpture as a way to look differently at her conceptually driven experiments. She wanted to work big, and examine ideas of space and scale but the reality of limited studio space and the question of how to manipulate heavy materials with her own body were obstacles. She began to explore other materials and discovered the heavy, latex weather balloon. It is strong and durable, and it can take up as much space as needed simply by inflating it with air. It also has a dynamic relationship to the creation of form: it can be tied and pulled and held together to create shapes that imbue a precarious possibility of bursting, or escaping their restraints.

The objects that Davidson has made since this time are formidable. They recall Leigh Bowery’s bound costumes, the monstrous femininity of Niki de Saint Phalle’s mosaic giants, and the humorous absurdity of Claes Oldenburg’s oversized objects. Davidson works with balloons of various size, often in vibrant colors that seem to saturate the air with color when inflated. Her forms nod to objects and bodies in both obvious and abstract ways. Covered in tight synthetic fabrics, her series Carnivaleyes are often stacked in the gallery like disembodied breasts that seem to blink at you with their cartoon cat eyes.

For Ridin’ High, her first show at Lord Ludd, and her first in Philadelphia since 1999, Davidson will show a new series of sculptures, alongside existing works from the past three decades. Her new works tower above the viewer on raised platforms, some 11 feet high, and are inspired by the lofted platforms historically used to carry deities or royalty through religious processions, parades or carnivals. Two of these “litters” display anthropomorphic forms held high by a platform on “legs” that are covered in shiny photo-printed spandex. The twisted oblong form is entwined like knotted limbs or disembodied phallic appendages. Another, Carried Away, holds an empty yellow net between pillars adorned with a spandex chain-link pattern. In contrast, Davidson’s older works—the Lulus and Fallen Clouds—tease out the tension between her exploration of the body and the possibilities for shaping abstract form that is inherent in her material and process. In particular, the Fallen Clouds reveal Davidson’s interest in the open work. Its form is ever-changing as the balloon expands and contracts over time, putting shape and weight to air. Like that famous Kardashian image, this conceptual approach and cheeky use of material, Davidson’s absurdly rotund and ever-expanding forms often take over the room (or internet) until they cannot be ignored. They playfully chide us with a reminder that the body is a contested territory where disbelief, fantasy and performance offer a space for transgression and a shift in power.

Nancy Davidson (b. 1943, Chicago, IL) lives and works in New York. Davidson is an interdisciplinary artist, working primarily in sculpture and installation. She received a BFA from the University of Illinois at Chicago and an MFA from the School of the Art Institute of Chicago in 1975. Her work has been exhibited at major institutions including the Museum of Contemporary Art (Chicago), the Art Institute (Chicago), the Walker Art Center (Minneapolis), Institute of Contemporary Art (Philadelphia), Aldrich Museum of Contemporary Art, (Ridgefield, CT), Corcoran Museum of Art (Washington, D.C.), Artists Space (New York), Albright-Knox Art Gallery (Buffalo, NY), among many others. Davidson’s honors include the Guggenheim Fellowship (2014), Pollock Krasner Foundation (2001, 2015), Creative Capital (2005), Anonymous Was a Woman Award (1997), Yaddo Residency (1980,2003), Massachusetts Council of Arts, Individual Artists Fellowship (1981), NEA (1979). Her work has been reviewed in the New York Times, Art in America, Artforum, the Village Voice, the Brooklyn Rail, Der Spiegel and Art/Text. In 2015, the monograph Nancy Davidson: Cowgirl was published by Daylight Books and distributed by D.A.P.

Andria Hickey is a curator and writer based in New York. From 2011–2016, she has been curator at the Public Art Fund where she has curated exhibitions in the public realm with artists such as Hank Willis Thomas, Fischli & Weiss, Danh Vo, Sam Falls, Katharina Grosse, Olaf Breuning, Monika Sosnowska, and Oscar Tuazon as well as group exhibitions in city parks such as Image Objects (2015); Lightness of Being (2014); Configurations (2013); and A Promise Is a Cloud (2012). Previously, Andria was Curator at Art in General (2010-2011) and Curatorial Fellow in Visual Arts at the Walker Art Center in Minneapolis (2007-2010). While at the Walker, she collaborated on exhibitions and publications including The Quick and the Dead (2008), Haegue Yang: Integrity of the Insider (2009), and Yves Klein: With the Void, Full Powers (2010), among others.